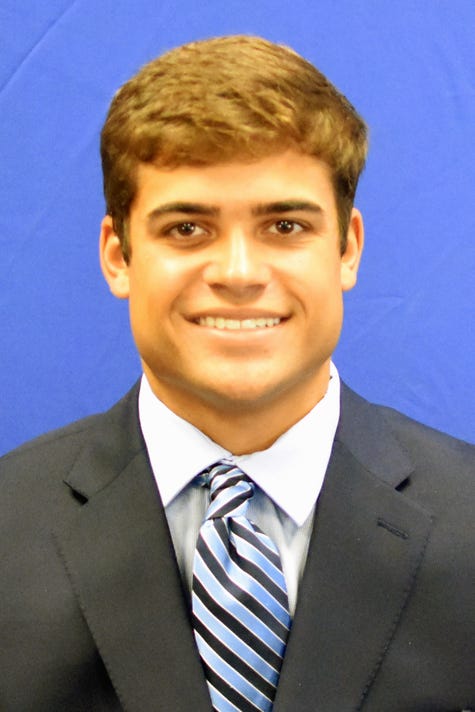 (Photo: Courtesy Indiana State)
Jake Bain's football team had just won the state championship his sophomore year of high school. He was so proud. Everyone kept telling him what an amazing athlete he was, what an incredible future he had in sports. That he'd play running back at a Division I college.
As the accolades poured in, all Bain could think was: "But...I'm gay. Can a football player be gay?"
At night, alone in bed, Bain would cry himself to sleep, begging to wake up straight.
Coming out: Indiana State's Jake Bain comfortable with his sexuality
Gregg Doyel: Marian football player ready to say 'I'm gay'
"I was at an all-time high and I was getting so much attention for athletics," Bain, a running back for Indiana State University, said Monday on the "The Ellen Show." "But at the same time, in the back of my head, I had started questioning my sexuality and what it was I truly wanted."
Weeks later, Bain was standing in front of his classmates in an assembly at John Burroughs School in St. Louis coming out. Ellen DeGeneres showed that clip before introducing Bain on her show.
Standing in a T-shirt with a rainbow and the word "Pride" on it, Bain told his high school:  "I wanted so badly to be straight. There were countless nights where I would cry myself to sleep, begging to wake up straight, asking why it had to be me."
DeGeneres looked at Bain after the clip and told him "I admire you. I'm proud of you. I know how hard it is for anyone to come out, especially a football player in a small town."
Bain, who was a three-time all-state player and also broke Missouri state and school records in track, said his high school was extremely accepting. College was his next worry.
"I had a lot of nerves coming out," he said. "At that time, there weren't... there aren't very many out openly gay football players."

Jake Bain, shown as a senior at John Burroughs School in St. Louis, after he came out. He was a three-time all-state football player who also broke Missouri state and school records in track. (Photo: Handout)
He wasn't sure any college would want him on its team. But once he got to Indiana State, Bain said, his worries were put to rest.
"Even before I committed there I talked to my coach about my sexuality and I wanted to be openly gay at Indiana State," Bain said. "And he assured me from the very beginning that I was going to be accepted by my community at Indiana State and that my teammates were going to treat me just like anybody else on the team. That just meant so much to me."
After hearing that, DeGeneres told Bain: "Life can be beautiful. Life doesn't have to be hard." She then introduced Bain's boyfriend, Hunter, who was in the audience.
"NCAA regulations say you can't accept gifts because you are an athlete or some stupid thing like that," DeGeneres said. "So Hunter is going to get a six-night stay at (a resort) in Fiji and maybe he will bring you."
Bain fought back tears as Hunter joined them on stage. Earlier in the show, Bain told DeGeneres she had been an inspiration to him.
"Before I came out I used to watch your show all the time and it just means so much to me to actually be here now," he said. "You've done so much for the entire LGBT community and just humanity as a whole so it means so much for me to be on the show."
Follow IndyStar sports reporter Dana Benbow on Twitter: @DanaBenbow. Reach her via e-mail: dbenbow@indystar.com.
Over 5Million Reads Adam Gonzalez at January 09, 2019

Email ThisBlogThis!Share to TwitterShare to FacebookShare to Pinterest
Labels: Gay in Sports