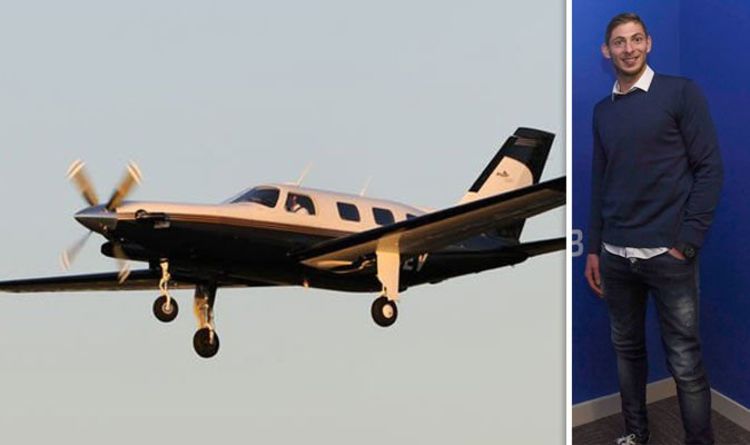 Premier League footballer Emiliano Sala was on a light aircraft which went missing over the Channel Islands.

The £15m Argentine striker, 28, was one of two people on board the Piper Malibu which lost contact off Alderney in the Channel Islands on Monday night.
Cardiff City, which signed Sala from French club Nantes in a record deal on Saturday, said it was "very shocked".
Guernsey Police said there was "no trace" of the Cardiff-bound flight and his family said they felt "desperate".

"I didn't know anything. I couldn't believe it," he said. "I'm desperate. I hope everything goes well."
Meanwhile, John Fitzgerald, chief officer of the Channel Islands Air Search, said the probability of finding anyone alive from the missing aircraft was "reducing very rapidly".

The plane left Nantes in north west France at 19:15 and had been flying at 5,000ft when it contacted Jersey air traffic control requesting descent, Guernsey Police said.

The plane lost contact while at 2,300ft and disappeared off radar near the Casquets lighthouse, infamous among mariners as the site of many shipwrecks, eight miles (13km) north-west of Alderney.

The force added UK authorities have been calling airfields on the south coast to see if it landed there but there had been no confirmations and a decision about an overnight search would be made at sunset.

Media captionCardiff City signed the 28-year-old from French club Nantes
A spokesman for the French Civil Aviation Authority said the Piper PA 46 Malibu aircraft was French but had not been registered in France.

"We can confirm Emiliano Sala was on board," he said.
"This morning, the French research started with one French national navy ship and one aircraft. The investigation will determined which authority will take the lead on the research."
Sightings of red flares were reported during a lifeboat and helicopter search, but "nothing of significance was found", a Channel Islands Air Search spokeswoman said.

Police said on Tuesday more than 100sq miles had been searched by five aircraft and two lifeboats. The search had resumed after being called off overnight "due to strengthening winds, worsening sea conditions and reducing visibility".

Cardiff Airport confirmed the aircraft was due to arrive from Nantes but a spokeswoman said there were no further details.
Guernsey harbour master Captain David Barker said no distress call had been received and if the search continues into the night it is unlikely to have a good outcome.
"It's far easier to see something on the surface in daylight," he said. "We are looking for any traces of an aircraft, a life raft, persons in the water, life jackets."
Flowers have been left outside the Cardiff City Stadium

The Met Office said conditions were not "too intense" at the time the aircraft went missing but had become wetter and windier later in the evening.
John Fernandez, a reporter for BBC Guernsey, said it was a difficult area to search.
"A number of search vessels are out searching the area. It's known for its strong currents - there are a number of shipwrecks," he added.
"The search area is absolutely massive at the moment. They're searching a number of different spots at the moment - they're not sure whereabouts this plane might have gone down."
'Last goodbye'
Cardiff signed Sala for a club record fee after protracted negotiations with Nantes and he was due to join his new teammates for training on Tuesday. Training was cancelled.
In a statement, the club's chief executive Ken Choo said they were praying for "positive news" for the player and pilot.

Twitter post by @GaryLineker: Terribly worrying news that @CardiffCityFC’s new signing, Emiliano Sala was on board the small plane that has gone missing. Hopefully, somehow, they’ll be found and safe.Image Copyright @GaryLineker@GARYLINEKER
Sala began his playing career at Argentine side Club Proyecto Crecer, before moving to French club Girondins Bordeaux in 2012.

His previous side, Nantes, has postponed its games against Entente on Wednesday and St Etienne on Saturday, according to its match schedule.
Local journalist Arnaud Wajdzik said the atmosphere in Nantes is "very emotional", and people planned to gather in the town square this evening for a vigil.

Reacting to the news at Cardiff City Stadium, Keith Morgan, chairman of the Cardiff City Supporters Trust, said he was shocked by the news.
"We're obviously still hoping it's not confirmed but when or if it is, we will contact Nantes offering all our help," he said.

"I think fans realise what's important and things like this put everything into perspective. Football is important in all our lives but not more than a person's life."
Supporter Christopher Jenkins, 45, of Caerphilly, said: "I was nearly crying with my wife - it's a massive shock to everybody."