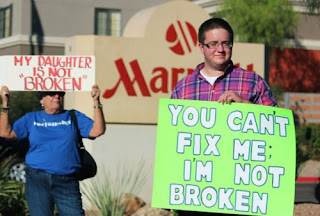 Google has come under fire for featuring an app that encourages gay people to seek controversial conversion therapy in its online store.

The Texas-based Christian group is accused of referring to transgender and gay people as “sexually broken” individuals who can “walk out of false identities”, and claiming that the gay lifestyle is harmful.

Campaigners have claimed that the app falsely portrays being gay as an “addiction”, “sickness” and “sin”.

Activist group Truth Wins Out started a petition online earlier this month demanding that Google remove the app from its online store. The petition has so far collected over 36,000 signatures.

The activist group said: “By any standard, the app is awful. It brazenly compares homosexuality to an addiction. It casually trashes LGBT people as living ‘destructive lifestyles’.”

Google has been accused of “foot-dragging” after it failed to follow the lead from Amazon, Microsoft and Apple, which removed this app from their online stores last month after being approached about it.

Wayne Besen, executive director of Truth Wins Out, said that it is “unconscionable” that Google is still offering an online platform to this app.

He said: “We are hoping this is simply an oversight from a very large company, rather than an objectionable policy decision that would warrant further action.”

Google’s figures show that the app has been downloaded over 1,000 times since its launch in 2014.

Phil Samba, a London-based social activist, told the Telegraph: “We don’t know who is reading it, who is affected by it and what damage it is doing.

“I think it’s a terrible thing. I think it’s terrible because there are a lot of people out there that don’t understand their sexuality. When you’re young and in the LGBTQ community you are brought up told that being gay is wrong or a choice. For those vulnerable people who are suicidal, it can be really dangerous.”

Last year Facebook was criticized for allowing advertisers to target young LGBT people with "predatory" gay cure adverts on its site through micro-targeting.

The UK Government announced a consultation on how to ban the practice of conversion therapy last year after a survey found that thousands of people were offered the so-called treatment.

Conversion therapy, which aims to 'cure' gay or trans people was found was offered to more than 5,000 of the over 100,000 people who responded to a Government survey.  The true figure is likely to be far higher.

A Living Hope Ministries spokesman said: "The claims made by Truth Wins Out are inaccurate and are not descriptive of our ministry or the free app that we offer or the other free services we provide individuals.

"We are a discipleship ministry that holds to a traditional, orthodox, understanding of Scripture. We journey with individuals who seek out our help and help as they pursue a more intimate relationship with Jesus Christ.

"We are saddened by the efforts of Truth Wins Out to eliminate our voice in the public arena."
Over 5.6 Million Reads Adam Gonzalez at January 16, 2019

Email ThisBlogThis!Share to TwitterShare to FacebookShare to Pinterest
Labels: Google, Pray away the gay