Congress Trying to Save NATO from TRUMP (and Putin) 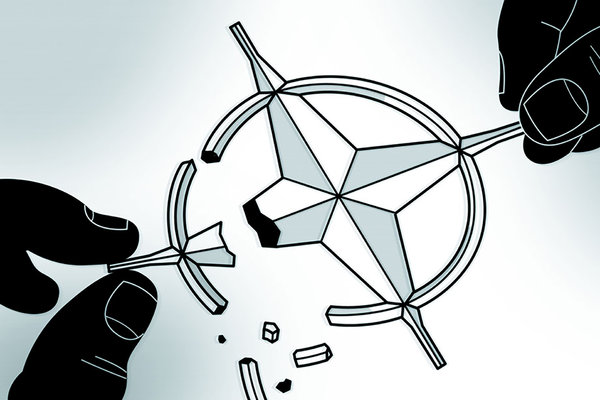 The idea that the United States could withdraw from NATO is surreal.

The alliance, now numbering 29 countries, has been the foundation of trans-Atlantic stability and prosperity for seven decades. It continues to keep a predatory Russia at bay and diminish the danger that American soldiers might once again have to fight on European soil.

Yet in Donald Trump’s go-it-alone presidency, the possibility of America’s withdrawal has become such a concern that Congress is taking steps to prevent it.

The Democratic-led House on Jan. 22 voted 357-22 for a bipartisan bill that would tie Mr. Trump’s hands by refusing him any federal money to pay the costs of leaving the alliance.

The Republican-led Senate should quickly follow, either approving the House measure or a separate bill proposed by a bipartisan group of senators that requires Mr. Trump to obtain approval from two-thirds of the Senate to “suspend, terminate or withdraw U.S. membership in NATO.” If the president refused to abide by a Senate vote preserving NATO membership, the bill would then prohibit the use of federal funds for withdrawal.

It seems obvious that leaving NATO would be a foreign policy debacle, eroding American influence in Europe and emboldening Vladimir Putin, the Russian leader, who wants to weaken NATO so he can expand his political and military sway.

Despite all that, there is no sign that Mitch McConnell, the Senate majority leader, would stop such a move if Mr. Trump were to make it, as he has repeatedly threatened to do.

Mr. Trump’s own skepticism has long been apparent. He has questioned the alliance’s purpose and hectored the allies to pay more for defense. Spending has risen, but it also rose under Mr. Trump’s predecessors, who urged greater military spending but never wavered in their commitment to NATO.

Now the threat is growing: Several times last year, the president privately told senior administration officials that he wanted to withdraw from NATO, viewing it as a drain on the United States.

Wisely, his national security team, especially then-Defense Secretary Jim Mattis, stopped him. But Mr. Mattis recently resigned with a parting rebuke about the importance of alliances. While Secretary of State Mike Pompeo and John Bolton, the national security adviser, are viewed as NATO supporters, neither has shown the sort of backbone Mr. Mattis did.

An ominous sign was Mr. Pompeo’s recent Fox News interview in which he was asked if the United States would send soldiers to defend NATO member Montenegro. Mr. Pompeo replied, “I’m not going to get into hypotheticals.” Except it’s not a hypothetical. Under the treaty’s Article 5, NATO members pledge to defend fellow members if they are attacked.

Can the Trump administration be counted on or not? The president has already pulled out of the Paris Agreement on climate change and the Trans-Pacific Partnership Agreement, and he is threatening to ditch the Intermediate-Range Nuclear Forces Treaty.

Whether lawmakers have the power or the spine to override or prevent a decision by Mr. Trump to end the nation’s NATO commitments remains an open question. Many legal scholars say he can pull out of treaties unilaterally without Congress’s consent, but others say Congress has made clear that NATO is different. It’s time for Congress to pre-empt any possible debate about this question.

The House voted overwhelmingly to block President Trump’s threat to quit the Atlantic alliance. The Senate should promptly follow suit.

By The Editorial Board....The New York Times
The editorial board represents the opinions of the board, its editor and the publisher. It is separate from the newsroom and the Op-Ed section.