When the Coca-Cola Company famously introduced the world to New Coke 30 years ago today, it marked a historic — and short-lived — deviation from the drinkmaker’s secret 99-year-old formula. But four decades before New Coke set off a consumer firestorm, Coca-Cola made another notable adjustment to its signature product, creating clear “White Coke” at the request of one very special customer, who just happened to be a prominent Soviet general. 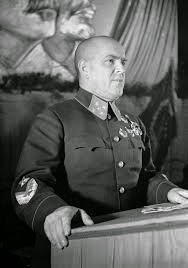 During World War II, Coke was it. According to Mark Pendergrast, author of For God, Country and Coca-Cola, the carbonated beverage was the ultimate morale booster, one craved by troops on both sides of the global conflict, and a luxury that was often in short supply. One bottle sold at auction in Italy for $4,000. “I have seen four high-ranking officers opening a bottle of Coca-Cola,” one U.S. soldier wrote, “as if it were a magnum of Cordon Rouge 1929.”

Coke became synonymous with America, a symbol of sweet democracy or sugar-laced imperialism, depending on which side of the battle lines you enjoyed “the pause that refreshes.” Coca-Cola pursued both categories of drinkers, and by the time the war was over, there were more than 60 bottling plants across Europe and the Pacific, many behind enemy lines, as millions of soldiers and civilians got their first taste of the iconic beverage.
One of Coke’s biggest fans was U.S. Gen. Dwight D. Eisenhower — responsible not only for shoring up supplies for American troops but also for introducing Marshal Georgy Zhukov, a prominent Russian general, to Coke for the first time. Zhukov, the most decorated soldier in Soviet history, was instrumental to the victory over Nazi Germany. The fierce leader had, says Pendergrast, “defended Moscow against Hitler’s crack troops, then broken the German resistance at Stalingrad, lifted the siege of Leningrad, and championed the triumphant Russian advance from Warsaw to Berlin.”
So you can understand why the war-weary Zhukov was in the market for a refreshing drink. And the man who gave the Soviet general his first sip of Coke was none other than Eisenhower himself. Or, more accurately, his first shot of it, as that’s how the beefy Russian reportedly imbibed the unfamiliar soft drink — as if it were a hit of vodka, one that sent fizz up his nose, and Eisenhower into a fit of laughter at the sight.
The Russian war hero quickly became a Coke addict, and when the war ended, he reached out to his U.S. supplier for more. The beverage was prohibited in the Soviet Union and Zhukov knew that Stalin would not look favorably on one of his top generals — now in charge of Soviet-occupied Germany — embracing the symbol of American capitalism. In requesting his secret rations, however, Zhukov demanded a couple of other concessions from the obliging Americans. “It must not look like the American product,” he said. “Don’t put it in that funny-looking bottle. And make it a different color.”
It was a tall drink order, and it went all the way to the man where the buck stopped, U.S. President Harry Truman. He enlisted Mladin Zarubica, one of Coca-Cola’s top guys in Europe, who was able to get a chemist to eliminate the drink’s artificial coloring and place the now-vodka-clear liquid in a bottle stamped with a red star. “My first shipment to Zhukov was 50 cases,” Zarubica later said. “White Coke for Red Russians. That was a deep, dark secret.”
Zhukov’s stash of White Coke was never discovered, but when the general — considered a potential rival to Stalin — fell out of favor with Soviet leadership, a raid of his Moscow apartment revealed that Zhukov had been hoarding other war trophies looted from Germany, including jewelry, rugs, silks, furs and paintings.
For its part, Coca-Cola would enjoy unprecedented global growth after the war, but would not see its iconic product stocked on Russian store shelves until a decade after Zhukov’s death. In 1985, the same year that Americans got their first taste of New Coke, Russians finally enjoyed their first (legal) sip of classic Coca-Cola. By 2014, Coca-Cola’s regional affiliate, despite being caught in the crossfire of Western sanctions against Russia, was shipping more than 2 billion cases of Coca-Cola products to 589 million customers in Russia and 28 surrounding countries. Not bad for a market that, at least in Russia, was once limited to 50 crates and a single customer.
OZY
Over 5.6 Million Reads Adam Gonzalez at May 26, 2015