Executions on the US: Electrocution,Lethal Injection and Nitrogen Gas 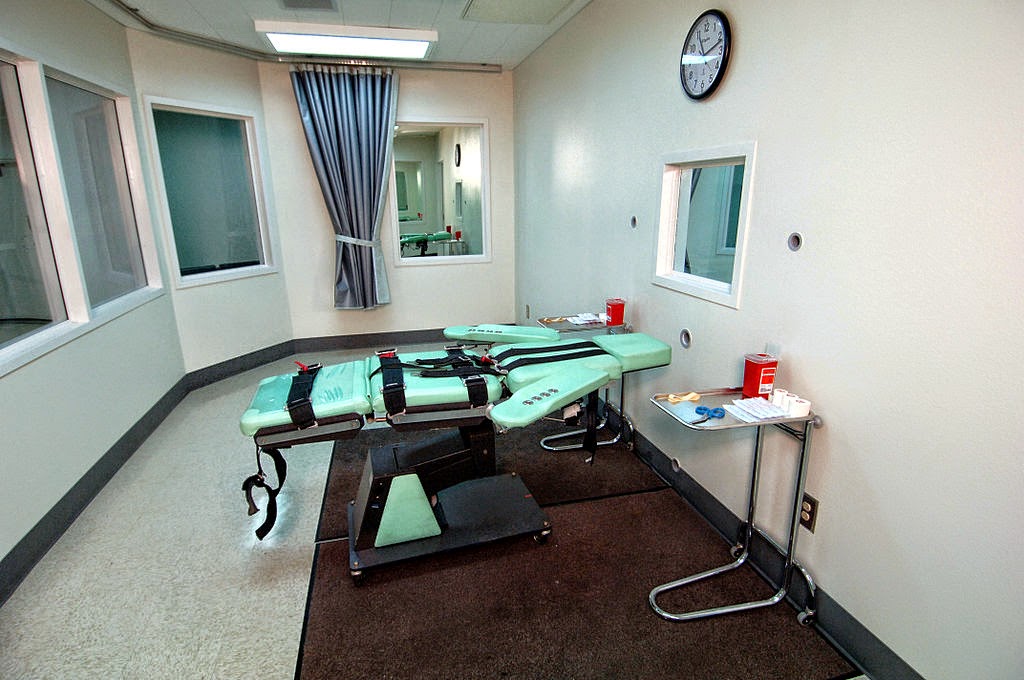 Increasingly, US death penalty states are no longer content to have just one method of execution on the books. Instead, with a persistent shortage of lethal injection drugs, fueled in part by the European Union's ban on their export, American states are putting in place "back-up" methods of execution.

In the last decade American executions were put on hold for a short time in the lead up to the US Supreme Court's decision in Baze v. Rees, an Eighth Amendment challenge to Kentucky's three-drug lethal injection protocol. Executions are now on hold again in some states while the Supreme Court considers Glossip v. Gross—a challenge to Oklahoma's three-drug lethal injection protocol.

The US Constitution's Eighth Amendment contains just sixteen words: "Excessive bail shall not be required, nor excessive fines imposed, nor cruel and unusual punishments inflicted. "At the heart of challenges to capital punishment—and to methods of execution in particular—has been the meaning of the Eighth Amendment's last six words, popularly known as the Cruel and Unusual Punishments Clause.

In a prior book, Cruel and Unusual:The American Death Penalty and the Founders' Eighth Amendment, I detailed the Eighth Amendment's history. What I found: the Founding Fathers were not all that gung-ho about capital punishment. In fact they rejected England's "Bloody Code", embraced Enlightenment-era writings and were fascinated by the potential of the penitentiary system to eliminate harsh punishments.

Thus far legal challenges to methods of executions have not fared well before the nation's highest court. In Wilkerson v. Utah, the US Supreme Court approved the use of public firing squads. In In re Kemmler, the Supreme Court gave its approval to electrocution, a then-novel method. And in another ruling decades later, in Louisiana ex rel. Francis v. Resweber, the Court found yet another electrocution constitutional even though an earlier attempt had been botched that failed to kill the same inmate in the electric chair.

The Supreme Court's 2008 ruling in Baze—upholding the constitutionality of Kentucky's lethal injection protocol—was only the most recent rejection of an Eighth Amendment challenge to a mode of execution. In that case the Court found no constitutional violation as regards the administration of a deadly cocktail of drugs: sodium thiopental, an anesthetic to cause unconsciousness; pancuronium bromide, a muscle relaxant to paralyze the inmate's diaphragm and lungs; and potassium chloride, to induce a cardiac arrest.

Now the State of Oklahoma—with its own lethal injection protocol under scrutiny following the botched execution of Clayton Lockett—has authorized nitrogen gas as a new method of execution. Designed to asphyxiate condemned inmates by forcing them to breathe pure nitrogen through a gas mask, death by nitrogen is just the newest in a long line of execution methods stretching back to the Dark Ages. According to Representative Mike Christian, one of the Oklahoma bill's authors, the new method—put in place in case the state's lethal-injection protocol is struck down—is designed to ensure "a humane, quick and painless death." "The person will become unconscious within eight to ten seconds," Representative Christian explains, saying that death will ensue "a few minutes later."

But what sentiments like these ignore is that whatever the method of execution--hanging, firing squad, electric chair, lethal gas or lethal injection--the end result is exactly the same: the inmate's death. In their desperate search for a Plan B to lethal injections, states like Tennessee, Utah and Oklahoma are only changing the means to kill an inmate, not altering the ultimate outcome. Ironically, in cases like Hope v. Pelzer and Jackson v. Bishop, non-lethal corporal punishments have already been found to be "cruel and unusual punishments."

In the founding era, American lawmakers were greatly influenced by a now-obscure Italian philosopher, Cesare Beccaria of Milan. At age twenty-six, Beccaria published Dei delitti e delle pene, translated into English in 1767 as On Crimes and Punishments. That book called for proportionality between crimes and punishments and argued for the abolition of torture and capital punishment. Among its core principles, ones embraced by eighteenth- and nineteenth-century Americans: the certainty of punishment is more important than its severity and any punishment that goes beyond "absolutely necessity" is "cruel" and "tyrannical."

History reveals that American revolutionaries like Thomas Jefferson, James Madison and Dr. Benjamin Rush were looking for ways to make punishments less cruel—and the society's laws less sanguinary. Jefferson and Madison sought to drastically curtail the number of capital offenses in Virginia and Dr. Benjamin Rush—a signer of the Declaration of Independence—sought to eliminate the death penalty entirely, calling death "an improper punishment for any crime." William Bradford—one of Madison's closest friends and Pennsylvania's and then the country's attorney general—wrote a whole report titled An Enquiry How Far the Punishment of Death Is Necessary in Pennsylvania (1793).

For America's founders, the necessity for a punishment was key. Indeed, James Madison—in his own words—was attracted to "penitentiary discipline" as a substitute for what he called "the cruel inflictions so disgraceful to penal codes." In responding to a letter from a Kentucky physician, Madison wrote: "I should not regret a fair and full trial of the entire abolition of capital punishment by any State willing to make it." Toward the end of his life, Jefferson—a longtime reader of On Crimes and Punishments, having copied more than two dozen passages from it into his commonplace book—penned these words in the 1820s: "Beccaria and other writers on crimes and punishments had satisfied the reasonable world of the unrightfulness and inefficacy of the punishment of crimes by death."

A return to a core principle that any punishment that goes beyond "absolute necessity" is "cruel" and "tyrannical"—a notion embraced by Beccaria, Montesquieu and America's founders themselves—leads to the inexorable conclusion that the death penalty is no longer necessary. In 21st-century America, in our own age and time, the reality is this: life-without-parole (LWOP) sentences and maximum-security prisons are now readily available as a substitute for state-sanctioned executions.

By authorizing death by nitrogen gas, the State of Oklahoma—like other states trying to cling to the use of executions—has only doubled-down on a barbaric and antiquated, not to mention increasingly rare, practice. The number of murderers serving LWOP sentences now far eclipses the number of American death row inmates, and today's death penalty has a lot more to do with geography, race and the quality of one's counsel than with the nature of the crime. No California death row inmate has been executed in years, with a federal judge in that state having declared the death penalty unconstitutional, though it's a different story, of course, in places like Texas.

A recent study found that death sentences are heavily concentrated in a tiny fraction of the country's counties. According to Robert J. Smith, a DePaul University law professor, one percent of US counties account for roughly forty-four percent of all of the country's death sentences. The Death Penalty Information Center's 2013 report, The 2% Death Penalty, similarly found that more than half of all US executions are coming out of just two percent of the nation's counties. That is hardly "Equal Justice Under Law."

In fact, capital punishment has long been administered in a racially discriminatory and arbitrary manner. The race of the victim still often determines who lives and who dies, and death sentences—the product of death-qualified juries, in which death penalty opponents are systematically excluded from service—are being imposed in as arbitrary a manner as they were before death penalty laws were struck down in Furman v. Georgia. With the rise and increasing use of LWOP sentences, the sporadic use of executions by a handful of mostly southern locales should no longer be tolerated by the US Supreme Court.

No matter the method of killing—no matter the number of methods of execution—the death penalty's madness, with its ever-present potential to claim the lives of the wrongfully convicted, seems as clear as ever. Executions are not needed to ensure the public's safety; the incarceration of violent offenders in Supermax prisons can achieve that objective.

As for the Eighth Amendment itself, it is regularly read by the US Supreme Court to protect prisoners from harm, including non-lethal harms. The Eighth Amendment, in fact, can never be read in a principled manner until the death penalty goes the way of the pillory and the whipping post and is declared unconstitutional.

Until that day comes, hopefully sooner rather than later, the US Supreme Court's Eighth Amendment jurisprudence will continue to have a split personality, just like the character in Robert Louis Stevenson's novella, The Strange Case of Dr. Jekyll and Mr. Hyde.

John D. Bessler is associate professor of law at the University of Baltimore School of Law and an adjunct professor at the Georgetown University Law Center. He is the author of The Birth of American Law: An Italian Philosopher and the American Revolution (Durham, NC: Carolina Academic Press, 2014), which received first prize in the American Association of Italian Studies Book Award competition (18th/19th century category) and which is also a finalist in the IndieFab book award competition for non-fiction.

jurist.org
Over 5Million Reads Adam Gonzalez at May 03, 2015