Ireland Says Give me Your Singles, Your Gays and Those Looking for Marriage 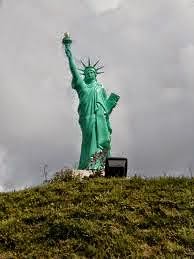 In the jet stream of Ireland’s landslide passage of a referendum legalizing gay marriage on Friday, Tourism Ireland has launched a global “Ireland says I do” campaign targeting the LGBT community for weddings and honeymoons.
“It includes advertising on Facebook directing people to a specially created section on Tourism Ireland’s website, Ireland.com, which is highlighting great wedding venues and ‘dreamily romantic locations to tie the knot,’ as well as cool bars and clubs,” according to a news release.
“It also features a brand new video showcasing our spectacular scenery and The Outing, the world’s first-ever LGBT matchmaking festival, an offshoot of the Lisdoonvarna Matchmaking Festivalwhich takes place in October.”
The historic vote — characterized by the archbishop of Dublin as a “social revolution” that requires “a reality check” on the part of the Catholic Church — is also expected to considerably boost tourism. It is already Ireland’s largest industry — responsible for more than 4% of its GNP — with 59% of revenue coming from overseas.
“The annual international travel spend by lesbian, gay, bisexual and transgender tourists was estimated to have been worth in excess of $200 billion U.S. dollars in 2014 with European LGBT travelers spending an estimated $66 billion,” writes Pamela Duncan in the Irish Times.
The “Ireland says I do” campaign will reach nine regions in particular:  Britain, the U.S, Canada, the Nordic region, Australia, France, Spain, Italy and Germany.
The campaign for marriage equality was itself a paradigm of effective messaging, resulting in 62.1% of voters approving the measure to change Ireland’s constitution to define marriage as a union between two people regardless of their sex, reports the AP’s Shawn Pogatchnik. It is the first country to approve gay marriage in a popular national vote; 19 others have done so through their legislatures and courts.
“The proposal was backed by all political parties, championed by big employers and endorsed by celebrities, all hoping it would mark a transformation in a country that was long regarded as one of the most socially conservative in Western Europe,” write Reuters’ Padraic Halpin and Conor Humphries.
“Prime minister Edna Kenny said prior to the vote that the country could ‘create history’ and that a ‘yes’ vote would ‘obliterate’ prejudice along with irrational fears of difference,” CNN Wires reports. “On Saturday, Kenny said the outcome ‘disclosed who we are — a generous, compassionate, bold and joyful people.’”
“In Ireland, we are known as a nation of storytellers,” said deputy prime minister Joan Burton. “And today we have told quite some story. This is a magical, moving moment.”
The Drum has put together a compendium of “brands, celebrities and, um, God [who] have tweeted their support of the outcome” — the latter a picture of a double rainbow over the center of Dublin from @TheTweetOfGod. Among the brands celebrating were @BenandJerrysIRL and @VICE. Virgin’s Richard Branson wrote, “Great to see the people of Ireland voting to live in a country where everybody is treated equally.”
“Analysts credited the ‘yes’ side with adeptly employing social media to mobilize young, first-time voters, tens of thousands of whom voted for the first time Friday,” writes the AP’s Pogatchnik “In addition, a series of searing personal stories from prominent Irish people — either coming out as gays or describing their hopes for gay children — convinced voters to back equal marriage rights.”
“After the result was announced Saturday, thousands of celebrants flooded into the Irish capital's pubs and clubs,” Euan McLelland writes for the Daily Mail. “At the George, Ireland's oldest gay pub, drag queens danced and lip-synced to Queen and the founding father of Ireland's gay rights campaign, Senator David Norris, basked in the greatest accomplishment of the movement's 40-year history.”
“The people in this small island off the western coast of Europe have said to the rest of the world: This is what it is to be decent, to be civilized, and to be tolerant,” Norris said.
Meanwhile, the CEO of Tourism Ireland, Niall Gibbons, said it is hopeful of developing a vibrant market.
“We know that in New York when it was legalized, the spend just in the first year on weddings and honeymoons was $250 million. Of that, nearly $20 million was in city and state taxes,” Gibbons said, according to the Irish Examiner.
“So, there is a market there. It’s very much in its infancy and this (campaign) is very much dipping our toe in the water.”
by Thom Forbes,
Over 5.6 Million Reads Adam Gonzalez at May 27, 2015