What a Cow Can do to Help the Climate 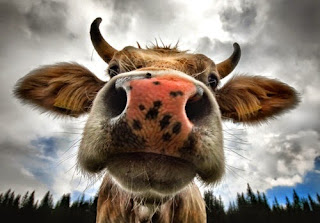 As an irrigation system cycles around the pasture, cows are moved from section to section, eating the grass and fertilizing the soil. The technique enables the farm to produce more milk on less land, boosting profits while preserving the wildlife- and carbon-rich Cerrado region.

BAHIA STATE, Brazil—Grande Sertão Veredas National Park got its name from João Guimarães Rosa’s sprawling poetic novel about the bandit gangs and cattle ranchers who lived in the lawless sertão, or outback, in the early 20th century. Today the park preserves a piece of this myth-infused region, a savanna that once covered more than a quarter of Brazil’s territory and harbors 5 percent of the world’s species. The tracks of tapirs, jaguars, maned wolves, giant anteaters, and wild horses can be found in the dirt roads here. But the park is now an island of wilderness in a sea of monocrop farms. Much of the land outside Grande Sertão Veredas has been razed for cattle pasture or converted for farming soy, coffee, and eucalyptus, which is burned for charcoal. Less than half of the dry forests, brush, and grasslands in this savanna, known as the Cerrado (pronounced “sey-HA-do”), remains intact.

Help has arrived in the unlikely form of a dairy farmer from New Zealand named Simon Wallace. Using a technique imported from his homeland, Wallace aims to reverse the process of deforestation and high-carbon cattle rearing that’s prevalent in Brazil and develop island farms amid a sea of wilderness. The technique leverages increased efficiency so that more dairy can be produced from significantly less pasture, reducing pressure to clear wilderness and allowing more native habitat to stand.
Wallace’s farm here, Fazenda Leite Verde (“green milk farm”), has been able to produce 10 times the volume of milk of a typical producer in Brazil’s main dairy farming region, known as the Minas Triangle, about 500 miles to the south. As a result, he’s been able to leave 80 percent of the farm’s 5,500 hectares in its natural state as habitat. The technique, known as intensification, could provide an alternative model for development in this region—where the rate of deforestation exceeds that of the Amazon rainforest—that’s both environmentally and economically sustainable. The milk Wallace’s company, Leitíssimo (“ the milkiest”), sells is of a higher quality than other products on the market in Brazil, so it can charge a higher price—which should make the system attractive to other dairy farmers in the tropics.
According to the company’s rough calculations, if all 32.1 billion liters per year of Brazilian milk were produced with Wallace’s methods, the industry could reduce its land use by 24.5 million hectares—an area the size of Italy. If that land were allowed to return to its native state, it could absorb between 6 billion and 10 billion metric tons of our carbon dioxide emissions. With all of humanity emitting about 40 billion tons per year, and about 15 percent of greenhouse gases worldwide coming from the meat and dairy industry, what happens on this dairy farm could affect all of us.
So far, observers are impressed. “If more people follow this model in tropical countries, it can reduce the dairy industry’s impact on the environment,” says Victor Cabrera, a Peruvian-born dairy scientist at the University of Wisconsin who has reviewed Leitíssimo’s numbers. “This is great work; there’s no doubt about it.”
About 20 miles from the park’s border, Wallace, a tall, pale man who favors a weather-worn cowboy hat, squints into the sun, surveying the Cerrado landscape. In the distance, his brown-and-white-splotched cattle graze on a green pasture carved out of the brush.
“The tropical system is fabulous,” he says in a thick accent. “Twenty-seven hundred hours of sunshine [a year], marvelous water, and sheer productivity.” Dairying in Bahia, Wallace brags, is like driving a “biological Ferrari.”
Wallace shares the belief of many conservationists that the most practical way to slow deforestation while feeding a growing population is by getting the most food possible out of every hectare of land devoted to agriculture.
So he set out while in his 20s to improve environmental and working standards in the milk business. Now 42, Wallace comes from a family of dairy farmers back in New Zealand; his father had a business exporting dairy cattle bred for tropical environments. After earning a master’s degree in philosophy and spending a few years in London and Spain, Wallace decided in the early aughts to move into milk, and he began researching countries where he could start a business. “I thought Brazil was a place of opportunity and hope,” he says.
Brazil is the world’s fifth-largest consumer of milk, and demand for a high-quality product has grown as the population has become wealthier and moved off farms and into cities over the last few decades. Wallace drummed up support for his endeavor among a quirky group of socially minded investors in New Zealand.
Because land prices are high there, farmers have come up with a variety of ways to get the most out of relatively small plots. Brazil, Wallace realized, had the opposite problem: Land was so cheap farmers simply cleared whatever land they needed. It didn’t matter if the pasture was low-quality because there was so much of it. The industry might get more efficient eventually, but by then the carbon sink of wild Brazil would become a carbon source as its vegetation was cut—and the country’s biological heritage would be lost. It needed to make a quantum leap.
Bahia state, in Brazil’s arid east, isn’t much of a dairying region, but Wallace found that the basin around Grande Sertão Veredas National Park had an abundant supply of water, and the air temperature dropped to the 50s at night. He would be 300 miles north of any major milk producer in the country—a risk, in that maybe the others knew something that he didn’t, but also an opportunity, in that he would be able to sell in both the capital, Brasília, and northeastern cities like Salvador and Recife, where dairy demand was poorly served.
From the beginning, Wallace made it clear to his investors that his aim went beyond maximizing profitability. The first clause of the shareholder agreement states that among Leitíssimo’s goals are “to lift the living and working standards of people working in the Brazilian dairy industry” and “to set high standards relating to environmental management and animal husbandry.” Little did he realize that it would take him almost a decade to get his first bottle of Leitíssimo milk onto shelves. “Luckily, our investors were patient,” he says.

Email ThisBlogThis!Share to TwitterShare to FacebookShare to Pinterest
Labels: Weather-Climate