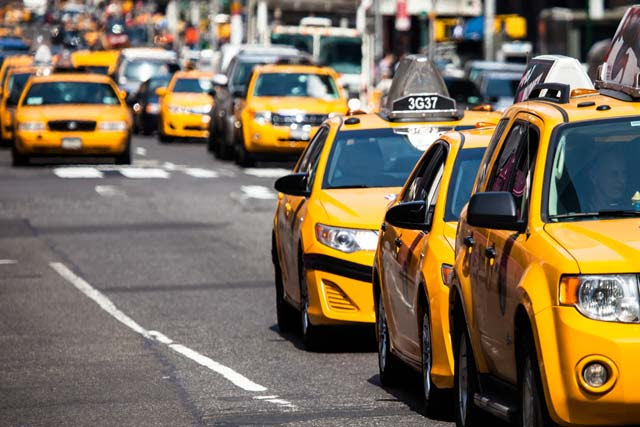 Stock photograph of taxies (Shutterstock)
The mayor of Puerto Rico's capital got a Bronx cheer from a yellow cab driver who gave her a hard time about driving to her hotel north of Manhattan. San Juan Mayor Carmen Yulin Cruz says that her taxi driver kicked her and her colleagues out of the cab when she asked him to take her to the Bronx from Manhattan, "He told us ‘You’re going to the Bronx, I don’t know how to get there.'"
Cruz was headed to the Opera House Hotel, a boutique hotel suggested to her by her friend, NYC Council Speaker Melissa Mark-Viverito (the NY Times explains, "It was modern and clean, Ms. Cruz said, and a great bargain at $149 a night"). When the cabbie picked them up, he started driving but then changed his mind and told them to get out. Cruz said, "And he knew he wasn’t doing right because I said, ‘Well, I’m not going to pay you. You’re kicking me out.’"
Then Cruz and her group got another cab, but that driver also complained about going to the Bronx—though he did drive them there.
It's illegal for NYC taxi cabs to refuse passengers service to anywhere in NYC—and drivers must also take passengers to Westchester County, Nassau County and Newark Airport! Not that this is an excuse, but one retired taxi driver explained to the Daily News that many cabbies hate going outside of Manhattan because more often than not, they won't have a fare on the way back.
The TLC's spokesman said, "We sincerely regret Mayor Cruz’s negative experience and assure her that we are investigating this fully and will hold the drivers accountable for their actions. We hope to someday have an opportunity to introduce her to some of New York’s City’s true professional cabdrivers, so that she can see firsthand what an unfortunate aberration these drivers were.”

Jen Chung in News
Over 5Million Reads Adam Gonzalez at May 30, 2015

Email ThisBlogThis!Share to TwitterShare to FacebookShare to Pinterest
Labels: NYC