I had to publish this report coming from Russia because I posted when France Gave in to International Pressure and stopped the sale of this Extra Sophisticated Helio Carrier. Now Russia gave up in trying everything from money to intimidation and finally thru in the Russian towel by saying it didn’t want them now :) Big nations can behave like kids if their leaders think that way. In this case we only have one leader, a bully that runs around without a shirt showing not a six pack but a flabby tummy. Adam 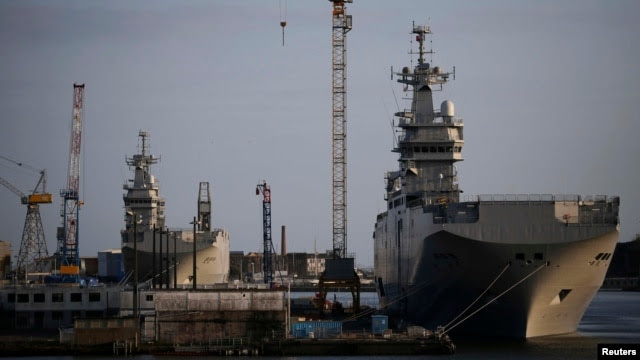 The Mistral-class helicopter carriers Sevastopol (right) and Vladivostok are seen at the STX Les Chantiers de l'Atlantique shipyard site in Saint-Nazaire, France, on May 21.

Russia says it is terminating a 1.4 billion-euro ($1.5 billion) deal for two Mistral-class amphibious assault ships from France.
In September 2014, French President Francois Hollande announced that the two warships would not be delivered due to Russia's "recent actions in Ukraine."
Russia’s state-owned TASS news agency quoted Oleg Bochkaryov, the deputy head of the Military-Industrial Commission, as saying on May 26, "Russia won't take them, that's an accomplished fact."
"Now there is only one discussion -- about the sum of money that should be returned to Russia," he added.
Bochkaryov said Russia planned to construct its own similar vessels, not copy the Mistral, adding that Moscow had a "slightly different ideology for the endeavor of amphibious assault."
Earlier this month, the Kremlin said France had made a formal proposal to scrap the deal.
rferl.org
Over 5.6 Million Reads Adam Gonzalez at May 28, 2015