Cojones in Turkey! First Applies for Gay Marriage Now He is Running for Office 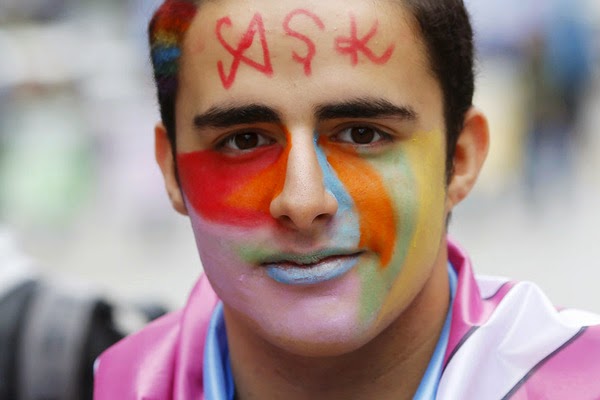 ISTANBUL — Barış Sulu has made history twice. Four years ago, he and his partner became the first gay couple to apply for a marriage license in Turkey; now he’s running as the first openly gay candidate for a seat in Parliament.

The 37-year-old LGBT activist describes himself as a lifelong fighter. As a young boy, he waged a solo-campaign against nuclear energy, writing to dozens of Turkish newspapers to oppose the construction of a reactor. After coming out at 17, Mr. Sulu became active in Turkey’s burgeoning LGBT-rights movement. Two decades later, he’s still at it.
Sulu’s partner is Aras Güngör, a gay transgender man who is still considered a woman by the government. Hoping to draw attention to the need for marriage equality, the couple attempted to formally tie the knot in 2011 but were refused by Turkish authorities.
“What we want is to be recognized as equal citizens of this country,” says Sulu, a candidate with the People’s Democratic Party, a new leftist party. “Society is ready for a change and I believe the time is now for someone who’s open about his identity to fight for LGBT issues in Parliament.”

Turkey
Although he faces an uphill battle, Sulu’s candidacy speaks to the LGBT community’s rising profile in a largely conservative Muslim society. Yet activists caution that progress on gay rights in Turkey is still stymied by a dearth of legal protections, persistent discrimination, and anti-LGBT violence.

For lesbian, gay, bisexual, and transgender individuals, life in Turkey is full of contradictions. Homosexuality was decriminalized in the Ottoman era, but the Turkish Army considers it a “psychosexual disorder” and bars gays from serving. Sex-change operations are legal, but only when preceded by sterilization.
While Turkey now stages the largest gay pride parade in the Muslim world, there are no laws against discrimination based on sexual orientation or gender identity. Turkey’s solution for combating discrimination inside jails is to segregate sexual minorities in “pink prisons.”
“The Turkish state has, for the most part, gotten around to accepting the idea that LGBT people exist, but there’s a major problem in recognizing that these individuals are human beings who have rights that need to be protected,” says Andrew Gardner, Amnesty International's researcher on Turkey.
LGBT-rights organizations have grown more numerous and better organized — buoyed, in part, by the their prominent role in the antigovernment protests here in 2013. That’s helped pave the way for more visibility for LGBT figures. Two years ago, rights activist Michelle Demishevich made headlines when she became Turkey's first openly transgender TV reporter, although she was later dismissed from her job. Meanwhile, one of Turkey's most famous singers, Bulent Ersoy, is a transsexual woman who fronts a Pepsi advertising campaign.
But without legal protections, the thaw in cultural attitudes means Turkey remains a hostile place for LGBT people. “We face discrimination every single day in the workplace, in schools, and at hospitals,” says Sulu. “The one little space where gays and transsexuals have been pushed into is the entertainment sector, as long as they avoid political statements — but it’s very limiting and isolating.”
With no legal safeguards, discrimination is rampant in the workplace, classroom, and heath centers, as well as in access to public services. Many LGBT people are forced to conceal their identities out of fear of the consequences.
Activists say the prejudice also extends to the courtroom, where statutes relating to “public morality” and obscenity are often interpreted in ways that discriminate against gays. The latest blow came last month, when Turkey’s highest court banned “oral, anal, group, gay or lesbian” pornography on the grounds that it contained “unnatural sexual behavior.”

No laws, no justice

For LGBT people, Turkey can be a deadly place. In 2008, Ahmet Yildiz – an openly gay young man – was killed by his father, the first gay honor killing to receive widespread media coverage. While accurate statistics are difficult to come by, rights groups counted at least 41 hate-based murders of LGBT individuals between 2010 and June 2014, according to a report presented to the United Nations earlier this year.
“Unfortunately, this is a common story in Turkey, where there LGBT people suffer both from violent attacks and the lack of recourse,” says Firat Söyle, a prominent human rights attorney who works on LGBT cases, including the murder of Mr. Yildiz. “There are no laws, therefore there is very little justice.”
Transgender men often suffer the brunt of the violence. Many struggle to find legitimate jobs and are forced to turn to sex work where they are vulnerable to harassment or worse, says Kemal Ordek of the sex worker advocacy group Red Umbrella.
Harassment and violent attacks outside the sex industry are also common. On Saturday night alone, four transgender women were attacked in the cities of Istanbul, Kocaeli, and Izmir.
Turkey’s law against hate crimes doesn’t include provisions for sexual orientation or gender identity. If elected, Sulu says he’ll fight for legal protection from this kind of discrimination, and to broaden the definition of a hate crime.

For Sulu, the most formative and experience has been his struggle to get married. While Turkey has no law explicitly against gay marriage, officials refused to grant the couple a license, forcing Sulu’s partner to undergo a series of humiliating medical examinations. They sued the Ministry of Health for discrimination in a case that is still in the courts.
Since then, Sulu has founded the Trans Consulting Center, an organization that offers legal counseling and emotional support for people during their transition process, and lobbies to overturn laws that discriminate against transgender individuals.
Even if Sulu wins and other leftist candidates make inroads in the June 7 parliamentary elections, enacting meaningful reforms will be difficult. “It’s been clear, especially in recent years, that this government has taken a very hostile position towards any protections for LGBT people,” says Mr. Gardner.
Turkey’s top leaders see gay rights as a threat to traditional values. A former state minister described being gay as a “disease” that needed to be cured. President Recep Tayyip Erdoğan has said it’s at odds with the “culture of Islam,” declaring that the Turkish public is “not ready” for laws protecting the LGBT community.
Sulu bristles at the notion: “If not now, then when?”