For Gay Rights, Keep Calm is Not Over Yet 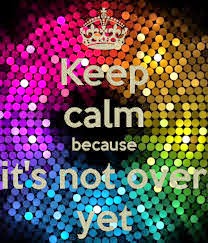 Nearly a year after the cities of Miami Beach and Orlando passed resolutions in favor of gay marriage — and five months after same-sex couples began marrying in Florida — the Miami-Dade Commission has at last weighed in on the issue.
In less than two months, the U.S. Supreme Court will decide gay marriage once and for all. But on Tuesday, Miami-Dade commissioners passed a symbolic resolution — just barely on a 7-5 vote — in favor of same-sex marriage and against the state’s 2008 constitutional marriage ban.

“We voted. Now I know that fads change. I know it’s hip and cool now to embrace certain issues,” Miami-Dade Commissioner Esteban “Steve” Bovo said at the meeting. “The reality is no matter what man says, no matter what a court says, marriage is between a man and a woman. That’s the way it was designed.”
Bovo also spoke out last year against adding gender identity and expression to the county’s existing nondiscrimination law. In December, the commission voted 8-3 to add the protections and this year some social conservatives sought the Florida Legislature to repeal the portion of the law that allows trans men and women to use public restrooms of their choice.
“Florida is an example of how they’re going to keep trying. Everyone says they’re going to give up. They're not going to give up. They just keep fine tuning and rebranding. Regrouping. Finding a way that works,” said longtime LGBT rights activist Michelangelo Signorile, author of the new book, It’s Not Over: Getting Beyond Tolerance, Defeating Homophobia, And Winning True Equality.
Signorile, an early advocate of outing and author of the 1993 book Queer in America, acknowledges that LGBT people have made “enormous strides” recently.
“We did get a lot of progress in a very short period of time. On some level, that had a lot of people spellbound. It’s intoxicating and we think we’ve made it. It’s inevitable,” he said, adding that the political wins have made some folks complacent about demanding even more. “I call it victory blindness, when people pull back because they think we’re winning and we should be winning much more.”
Many people are satisfied with winning gay marriage, “but they can be fired from their jobs or thrown out of a restaurant for holding hands. They get the message that there is a disconnect, they’re still suffering discrimination,” said Signorile, a popular host on SiriusXM Radio.
Signorile said many radio callers, particularly from Middle America, say they still experience discrimination.
“The phones would light up with people experiencing this,” he said. “Unfortunately, there is a sort of focus by the LGBT groups, particularly in Washington, on those wins and not focusing on the bad news. Maybe it's fundraising, or wanting to look powerful, but there is a decision to focus a lot of times on the wins and not take on the other battles.”
He points to recent laws passed in Arkansas and Indiana that some conservatives say protect religious freedoms and some liberals say are discriminatory and antigay.
“Now, we’re seeing an attempt to claim that the gay activists are somehow pushing their agenda onto religious people,” Signorile said. “They know that just calling gays perverts and sinners and attacking that way doesn’t work [anymore]. It turns off a lot of people in the middle, independent. They now see gays as attackers of the First Amendment and taking away religious freedoms. They’re trying to turn themselves into victims.”
Said Signorile: “We’re the ones without protections.”
Signorile warns that “in 2016, anti gay forces are not going away.”
“It’s the job of the candidates and the activists to show younger people what the stakes are,” he said. “This is about their future. Do they really want to live in a world where they can get married and be fired from their jobs?”
By Steve Rothaus
srothaus@MiamiHerald.com
Read more here: http://www.miamiherald.com/news/local/community/gay-south-florida/article20359839.html#storylink=cpy
Over 5Million Reads Adam Gonzalez at May 07, 2015