PresObama: LGBT ARE Priority Around the World, Calls Gambia,Jamaica,Russia Homophobic 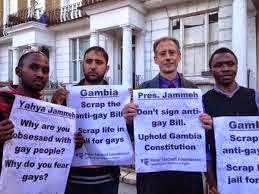 The White House said Saturday that LGBT rights around the world are a “government priority” and slammed the president of Gambia for threats made against gays in his country.
Yahya Jammeh told a crowd in the Gambian town of Farafeni last week, “If you do it I will slit your throat — if you are a man and want to marry another man in this country and we catch you, no one will ever set eyes on you again, and no white person can do anything about it.”
“The recent unconscionable comments by Gambian President Yahya Jammeh underscore why we must continue to seek a world in which no one lives in fear of violence or persecution because of who they are or whom they love,” National Security Advisor Susan Rice said in a statement. “We condemn his comments, and note these threats come amid an alarming deterioration of the broader human rights situation in The Gambia. We are deeply concerned about credible reports of torture, suspicious disappearances – including of two American citizens – and arbitrary detention at the government’s hands.”
Late last year, the U.S. stopped trade preferences with Gambia because of its “crackdown against its LGBT community and wider human rights violations,” Rice noted, and “we are reviewing what additional actions are appropriate to respond to this worsening situation.”
“We repeat our call for the Gambian government, and all governments, to lead inclusively, repudiate intolerance, and promote respect for the universal rights and fundamental freedoms of all people,” she added.
Tomorrow is the International Day Against Homophobia and Transphobia.
President Obama issued a statement today stressing “lesbian, gay, bisexual, and transgender (LGBT) rights are human rights, to celebrate the dignity of every person, and to underscore that all people deserve to live free from fear, violence, and discrimination, regardless of who they are or whom they love.”
“We work toward this goal every day. Here at home, we are working to end bias-motivated violence, combat discrimination in the workplace, and address the specific needs of transgender persons. Overseas, I am proud of the steps that the United States has taken to prioritize the protection and promotion of LGBT rights in our diplomacy and global outreach,” the president said.
“There is much more to do, and this fight for equality will not be won in a day. But we will keep working, at home and abroad, and we will keep fighting, for however long it takes until we are all able to live free and equal in dignity and rights.”
The administration also released a fact sheet detailing what it’s done to promote LGBT rights, including reviewing passport rules so couples in states with same-sex marriage can use married names on international travel documents and diplomats marching in gay pride parades. This past February, Secretary of State John Kerry appointed Randy Berry as the first-ever Special Envoy for the Human Rights of LGBT Persons, and there are six openly gay U.S. ambassadors.
“The U.S. Government has pushed back publicly and privately against discriminatory legislation, including in Uganda and The Gambia,” the White House said. “And senior U.S. officials continue to speak in support of LGBT persons around the world, as President Obama has done in trips to Russia, Senegal and, most recently, Jamaica.”
pjmedia.com/

Email ThisBlogThis!Share to TwitterShare to FacebookShare to Pinterest
Labels: International Homophobia, The President