Gentrification as a Crime Scene in Bushwick NYC 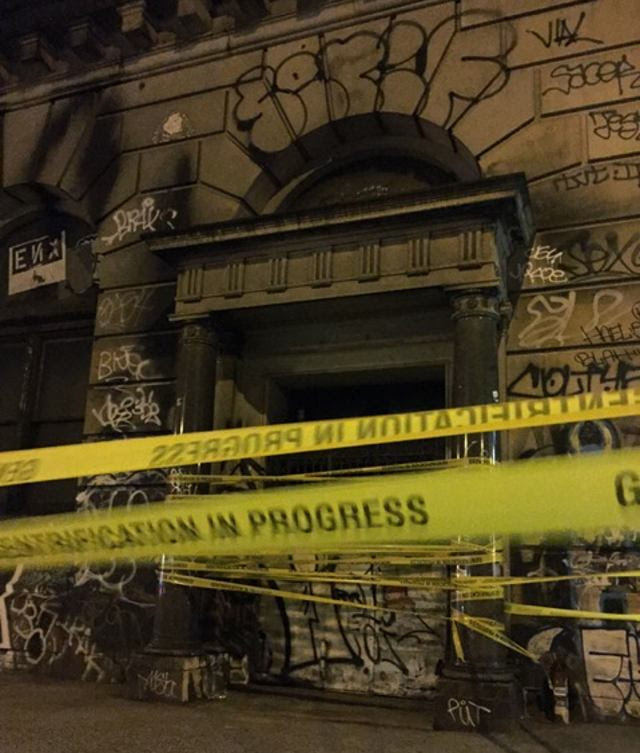 Gilf!'s handiwork on 190 Bowery last night (Gilf!)
Bushwick-based street artist Ann Lewis, a.k.a. Gilf!, biked from Williamsburg to the Lower East Side and back again last night, installing yellow Gentrification In Progress tape on shuttered storefronts, big box stores, and iconic New York City buildings—all recent examples of how wealthy developers are homogenizing city blocks.
Her two biggest hits were the Williamsburg building formerly occupied by the Brooklyn Night Bazaar, which was recently purchased by BMW, and 190 Bowery, the iconic Germania Bank building and notorious graffiti canvas, purchased in February for $55 million by real estate giant Aby Rosen. Lewis found Rosen's recent tease—first he "welcomed" the public to view an art show inside 190 Bowery, then he turned them all away with a security force—particularly offensive.
"As a street artist, I create art for the public," Lewis told us this afternoon. "If you say there's going to be a public art show, and then there's a security detail, that's one more snub towards the public in that neighborhood."
She's not the first one to act on her indignation. Last December, soon after 190 Bowery went on the market, street artist HOTTEA gave the building a huge, yellow "UUGGHH." 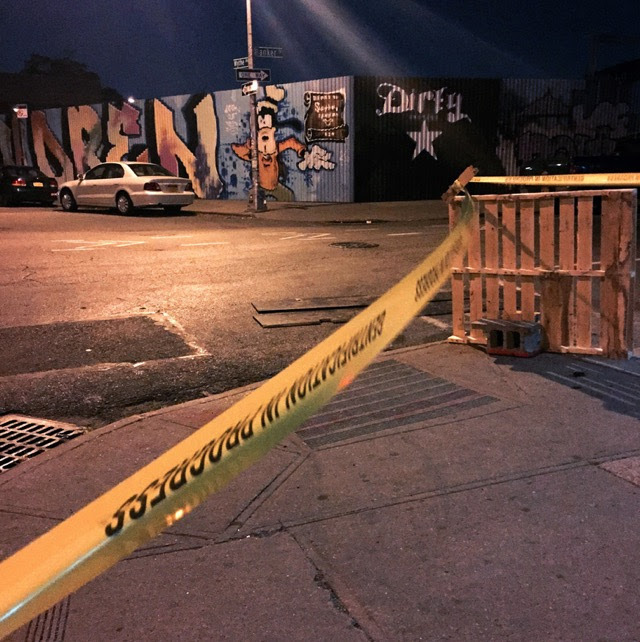 Gilf!'s tape on the sidewalk outside the Brooklyn Night Bazaar (Gilf!)
Around 2 a.m. this morning, Lewis managed to wrap about 800 feet of her caution tape around 190 Bowery, blocking off both doorways, as well as the sidewalks along Spring and Bowery, all while a friend looked out for her across the street.
She made it over to the Brooklyn Night Bazaar between 4 and 5 a.m., and closed off portions of the surrounding sidewalk there, while a breakdown crew—working through the night to disassemble the bazaar—respectfully stepped around her handiwork.
Lewis has been doing flash installations of her Gentrification In Progress tape for the past year, hitting up other gentrification victims like 5 Pointz in Queens (soon after all of its graffiti was whitewashed), and the red gates of Pearl Paint on Canal Street, soon after its shuttering. "Part of what I like about police tape, is that it forces people to walk around things, and to be barred away from things," she says. "It inadvertently forces people out of a place—it's a physical manifestation of a social problem."
Other stops on last night's installation spree included the J. Crew and Apple Store site in Williamsburg, and a popup shop on the corner of Spring and Mott Streets that's asking, as Lewis puts it, "six figures for 700 square feet." 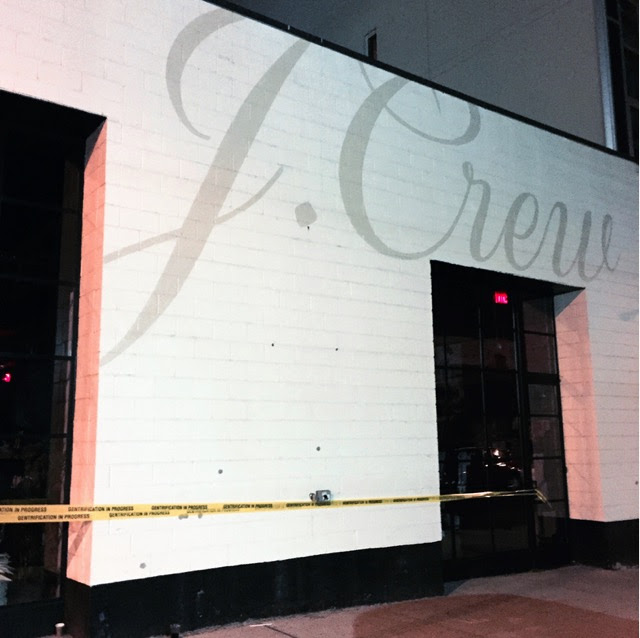 Gilf! takes J. Crew in Williamsburg (Gilf!)
The downside of caution tape installations is that they're extremely temporary. Lewis can attest that her 190 Bowery job was still up by 5 a.m., but by 11 this morning there were no traces left. "It's typically a very short-lived installation," she admitted. "Because once you tear one piece down, the whole thing kind of comes apart."
But that doesn’t discourage Lewis from producing the tape in bulk. "There will be more installations" she promised. “As more things sadly disappear."
gothamist.com
Emma Whitford
Over 5Million Reads Adam Gonzalez at May 27, 2015

Email ThisBlogThis!Share to TwitterShare to FacebookShare to Pinterest
Labels: Gentrification