The French Will be Boycotting The Sochi Games 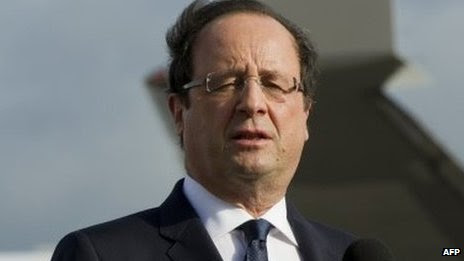 Frncois Hollande's government gave no reason for its decision to stay away
Neither President Francois Hollande nor any top French official will attend the 2014 Winter Olympics in Russia, Foreign Minister Laurent Fabius has said.
Mr Fabius announced the decision on French radio, but gave no explanation.
Last week German President Joachim Gauck also said he was not going to the games in the Black Sea resort of Sochi.
Activists have urged leaders to boycott the event over human rights concerns, including a new Russian law banning "homosexual propaganda".
Mr Fabius told Europe 1 radio on Sunday: "Top French officials have no plans to be there."
Mr Gauck announced he would not attend the Sochi games last weekend, but did not elaborate either.
European Commission deputy head Viviane Reding has also said she was not attending.
Russian President Vladimir Putin has staked his personal prestige on staging a successful Olympics in an effort to showcase his country, analysts say.
Mr Putin has said gay athletes are welcome in Russia and that the new law is needed to protect minors.
Russia also faces security challenges as Sochi is next to its restive North Caucasus region.
bbc.co.uk
Over 5Million Reads Adam Gonzalez at December 16, 2013