Indian Poet Novelist, ‘I am Gay I am Not a Criminal'

Vikram Seth, the bestselling novelist and poet, has launched a fierce attack on the recent reinstatement by the Indian supreme court of a ban on gay sex. 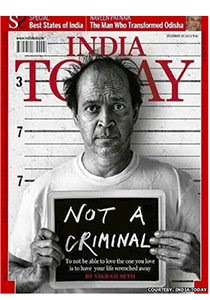 Speaking to the Guardian on the day a mock police mugshot of him holding a slate inscribed with the words "Not a criminal" appeared on the front of one of India's biggest-selling, English-language magazines, Seth said the court's judgment showed "intellectual shabbiness and ethical hollowness" which went against the true culture of an enormously diverse country.
"We are each of us in some way – by caste, gender, sexuality, language or religion – a minority, and the great achievement of the Indian polity over three generations is that somehow or other we have kept together as a nation," Seth, 61, said.
The legal decision to reinstate Section 377 of India's penal code – the law banning "sex against the order of nature" which dates back to the colonial era – prompted outrage in India and across the world. On FridayYesterday, the government, led by the centre-left Congress party, asked for a request for a judicial review petition of the supreme court's ruling.
But new legislation, which constitutional experts say is probably necessary to overturn the judgement, looks very unlikely. It would be unusually bold for an administration widely seen as weak to take on such a controversial issue months before what promises to be a tricky battle to retain power at a general election due next spring.
The opposition Bharatiya Janata party, which has roots in deeply-conservative Hindu religious and cultural organisations, has supported the reinstatement of the ban.
The fierce debate over the judgement, at least among metropolitan elites in India, is a further example of how sexuality has become a battleground in India, often revealing cultural splits between generations, between urban and rural dwellers and between those who invoke a "traditional past" contaminated by western influences and those who stress a local history of pluralism and tolerance.
Seth, whose 1993 work A Suitable Boy sold more than a million copies in the UK alone and won a string of prizes, said that homosexuality had long been part of Indian culture – and that Section 377 was a foreign imposition. "You find homosexuality in the Kama Sutra … In the Hindu tradition, the Muslim tradition, the syncretic [tradition] … there has never been intolerance of this kind," he said.
In an essay in India Today magazine, he attacked "the plausible priest, the blustering baba, the menacing mullah, … the political party that whips up the mob in the search for votes, the enforcers and justifiers of unjust laws."
The author, who was born in the eastern Indian city of Kolkata, said he was speaking as "an Indian citizen."
Seth, who is currently working on a sequel to A Suitable Boy, told the Guardian: "It is all the people who … are willing to kill, maim, disfigure, cast out. These people are not speaking with the tradition of Indian tolerance … with the sense of getting on with each other, which is at the heart of Indian-ness."
Seth said he had been "incensed" by the supreme court judgement. "The thing that bothers me most is the misery [it means] for people who live in small towns, who have come out, or if they have not … and their families … telling them not just that this is against our religion and our beliefs but also against our law and that they are criminals. It will increase their isolation, their loneliness, their unhappiness," he said.
Gay rights activists say that gay people face significant discrimination and police harassment, even if prosecutions for same-sex activity have been rare. Criminalising gay sex makes them vulnerable to blackmail, they say, and causes misery for many who already face prejudice from even close family members.
Defenders of the supreme court decision said the objections of the judges to the repeal of section 377 were "constitutional and legal, not moral".
However, critics said that the wording of the judgment – which refers to the "so-called rights of LGBT persons", describes same-sex relations as "against the order of nature" and says that "lesbians, gays, bisexuals or transgenders constitute only a miniscule fraction of the country's population" – reveals deep prejudice.
Seth said the idea that the idea the supreme court would "not bother" to act if there were insufficient numbers of people to justify its intervention was very dangerous.
"They say a 'miniscule number of people are involved'. Even 5%, and there are possibly more, of a billion people, and that is rounded down, is still 50 million people and that is the size of England, or France, or [the Indian states of] Karnataka or Rajasthan,” Seth said.
Over 5Million Reads Adam Gonzalez at December 22, 2013