So who will be the Jesse Owens of the Sochi Winter Olympics? 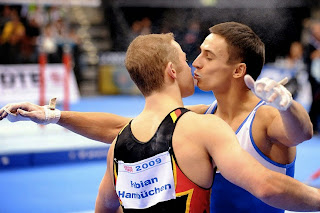 So who will be the Jesse Owens of the Sochi Winter Olympics?

Who will be the brave athlete who shines in rebuttal to Russia's crackdown on anything determined to be "gay propaganda."
Welcome to the new Cold War. For Owens, the nemesis was Hitler's ideology of racial superiority that placed Nordic "Aryans" at the pinnacle of humanity.
As a black man in segregated times, Owens identified with being targeted and subjected to second class citizenship. But instead of boycotting the 1936 games, as he initially intended, Owens stepped up to prove that Hitler's white dominance doctrine was a bunch of bull.
Owens won four gold medals at the 1936 Olympics; in the 100 and 200 meters, the 400-meter relay and the long jump. The Berlin games were a few years before the full horror of the Holocaust unfolded to the world, but Germany had already stripped Jewish citizens of rights and protections.
Keep that context in mind for how hate unchallenged can escalate.
For half a dozen years, Russia has been arching backward, with regions of the country passing laws that target gays and lesbians, or those who merely speak of them favorably. Gay foreign couples are no longer allowed to adopt Russian children. The premise upholding much of this cultural shift is the nonsensical, anti-scientific belief that a person "chooses" to be gay.
A federal Russian law, passed in June, specifically outlaws “propaganda of nontraditional sexual relations to minors" But otherwise the law is vague, giving a convenient and broad pretext to those inclined toward harassing gays.

Hoodlums already seem to have interpreted the law as cover to attack gays and lesbians. The U.S. State Department warns travelers to Russia: "Violence against the LGBT (lesbian, gay, bisexual and transgender) community has increased sharply since the law was passed, including entrapment and torture of young gay men by neo-Nazi gangs and the murder of multiple individuals due to their sexual orientation."
According to the Council for Global Equality, Russia has been ranked the least protective country in all of Europe for LGBT persons.
But with Sochi hosting a $50 billion extravaganza for the 2014 Winter Olympics, the stage is set for the world's response.
So far, much of the pushback from the international community has been tepid, diplomatically framed.
President Barack Obama, in citing schedule conflicts, won't attend the games. Neither will his wife, nor the vice president, nor any sitting cabinet member. Instead, openly gay athletes will be a part of the "diverse" U.S. delegation; tennis great Billie Jean King and Olympic medalists Caitlin Cahow and Brian Boitano.
That's a start.
The presidents of France and German have also said they won't attend. Although neither Joachim Gauck nor Francois Hollande, have issued a clear reason why not.
At least Obama in August made his feelings clear, saying, "One of the things I'm really looking forward to is maybe some gay and lesbian athletes bringing home the gold or silver or bronze. ..."
The International Olympic Committee recently raised the stakes, issuing its rules for athletes, reiterating the apolitical tenure of the games. "No kind of demonstration or political, religious or racial propaganda is permitted," the rule said.
Rather, separate spaces, away from the competition and official events would be provided to accommodate free speech. A similar rule is what got John Carlos and Tommie Smith ejected from the 1968 Mexico City Olympics for their silent podium protest against black poverty and racism.
But we all remember that iconic imagery; Carlos and Smith with gloved fists raised, heads bowed.
An athlete's performance at an Olympics is the culmination of a lifetime dedicated to their sport. But as Owens later wrote in his memoirs, his moment in Berlin needed to signify not only his own physical journey, but that of many more unnamed people.
"In the early 1830s, my ancestors were brought on a boat across the Atlantic Ocean from Africa to America as slaves for men who felt they had a right to own other men. I boarded a boat to go back across the Atlantic Ocean to do battle with Adolf Hitler."
It should be noted that Hitler also targeted homosexuals. It’s a sad reminder that for some people, the bull's eye hasn't shifted.
By MARY SANCHEZ | OP-EDThe Hartford Courant
Mary Sanchez is a syndicated writer from Kansas. She can be reached at msanchez@kcstar.com.
Over 5Million Reads Adam Gonzalez at December 21, 2013