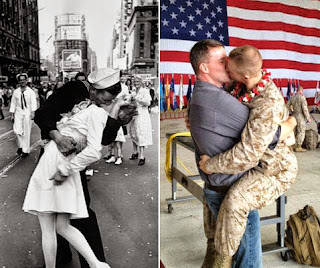 First of all, enjoy guys enjoy! legally what one have to do by nature. This site has always followed the anti gay propaganda, laws and attitudes that have Prague our military. I skipped the military experience in the navy for better or worse because I knew how hard it would be for me and decided this experience was not going to make me straight after all and I would be in danger of being discovered and discharged. But many gay men and women have gone on to serve regardless. I tip my hat to you and Iam proud to announce that the tail of DADT is been cut off. A nice christmas and new year gift.

Three years after the repeal of Don’t Ask Don’t Tell, Congress has gotten around to repealing the military’s ban on consensual gay sex.
“This is a very stigmatizing and discriminatory provision that by its very nature labels the relationships of all gay and lesbian service members  including those who are married, violations of military criminal law,” said Ian Thompson of the ACLU. “We see this as an important step forward for fair treatment of all military personnel.”


Although the ban was made all but unenforceable by the 2003 Supreme Court decision finding anti-sodomy laws unconstitutional, some anti-LGBT rights activists still sought to keep it on the books as a symbol of official disapproval of homosexuality. Article 125 of the Uniform Code of Military Justice currently bars servicemembers from engaging in “unnatural carnal copulation with another person ofthe same or opposite sex or with an animal.” The defense bill passed Thursday evening alters Article 125 so that it bans “forcible sodomy” and “bestiality,” but no longer criminalizes consensual intimate relations between servicemembers of the same sex that doesn’t violate other military regulations, such as fraternization. Having passed both houses of Congress, Obama is expected to sign the defense bill into law soon.

In 2011, Democratic legislators tried to repeal Article 125 of the Uniform Code of Military Justice, but the effort was defeated after conservative groups accused them of trying to legalize sexual abuse of animals. This time around, Senate Democrats, including Colorado Senator Mark Udall, Kirsten Gillibrand of New York, and Jeanne Shaheen of New Hampshire offered a proposal that would alter the language so as to keep bans on “forcible sodomy” and “bestiality” while decriminalizing consensual sexual activity between gays and lesbians.

The new proposal met little resistance, even in the Republican-controlled House, and even among legislators who just three years ago opposed allowing gays and lesbians to serve openly in the military.

Email ThisBlogThis!Share to TwitterShare to FacebookShare to Pinterest
Labels: After DADT