This Land Was Not Made For Homophobes 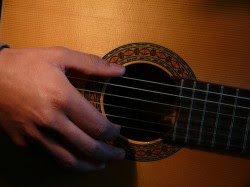 Ready for a sing-along? This land is your land, this land is my land, from California, to the New York Island ....
We all know the song, written and originally performed by the great Woody Guthrie and sung by countless of others since then, including Bob Dylan, The Kingston Trio, Bruce Springsteen, Sharon Jones & The Dap-Kings, and Peter, Paul & Mary.
It's that last version, the one by Peter, Paul & Mary, that the National Organization for Marriage would play at their ralliesall throughout the Summer of 2010, calling for an end to gay marriage, while championing laws that ban gay people from loving one another. And that torked a lot of progressive activists off, because Peter, Paul & Mary has always been a group that touted equality and love for all, regardless of sexual orientation.
One equal rights activist decided to take things into her own hands. When Kathleen Perrin heard that the National Organization for Marriage was using the song in their tour, she decided to alert Peter Yarrow, one of the folks who made up the trio of Peter, Paul & Mary. (He was the "Peter," in case you were wondering :)
And when Peter Yarrow found out that the group's song was being used to peddle discrimination and hatred, he got angry. And he fired off a cease and desist letter to the National Organization for Marriage.
"We would like to respectfully request that you refrain from playing the Peter, Paul & Mary recorded version of Woody Guthrie's 'This Land Is Your Land' at your public rallies," Yarrow wrote. "We respect your right to hold and advocate for any position you wish, but the philosophy of the 'National Organization for Marriage' is directly contrary to the advocacy position Peter, Paul & Mary have held for decades, and so we do not want our recording of this song played at your rallies."
Yarrow goes on to note that he embraces full marriage equality rights for LGBT Americans, and that he sees marriage equality as an issue that should be encompassed by the values in the U.S. Constitution. Yeah, quite the contrary to the National Organization for Marriage's work to kill marriage equality wherever it may exist.
Meanwhile, I'm left laughing at the fact that an uber-conservative group is using the song "This Land Is Your Land" at all, given that the song couldn't be more progressive if it tried. Heck, Woody Guthrie wrote the original song because he was sick and tired of the complacency of American folks songs like "God Bless America," which whip up patriotic sentiment, but fail to call Americans to action in order to take care of one another and hold up the liberties we're all afforded under the Constitution.
Not only that, but there's a second verse in "This Land Is Your Land" that would probably send most social conservatives fencing up property and clamoring for their guns. It goes a little something like: "As I went walking I saw a sign there, And on the sign it said "No Trespassing." But on the other side it didn't say nothing, That side was made for you and me."
Yeah, playing a Woody Guthrie at a National Organization for Marriage rally is like Rep. Michele Bachmann putting Rage Against the Machine on her campaign speakers. Can you say disconnect?
Three cheers for Peter Yarrow, and the spirit of Peter, Paul & Mary. Thanks for standing on the right side of history by supporting full equality for all people.
Photo credit: hiddedevries
http://gayrights.change.org