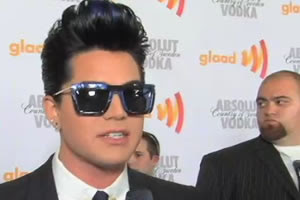 Pop singer and over-the-top entertainer Adam Lambert has
praised Freddie Mercury for his flamboyance.
The 28-year-old Lambert talked about Mercury's showmanship
in an NPRMorning Edition story on Mercury's musical legacy.
The lead singer of the legendary band Queen died in 1991 from
complications from AIDS.
“There's definitely something missing in today's music scene,”
Lambert says. “We don't have a lot of men on stage doing flamboyant or theatrical. We have a lot female pop stars doing it, but where are the guys? Where's the classic pop-rock showman?”
The openly gay singer certainly is not shy about theatrics.
His performance at last year's American Music Awards was labeled
“lewd and filthy” by social conservatives because it featured Lambert
locking lips with a male keyboardist.
Lambert went on to say that Mercury's voice is “supersexy.”
“Freddie's voice has so much texture to it,” he says. “He kind of
grabs at everything, he squeezes it.”
And he praised Mercury's flamboyant showmanship: “He was
completely over the top in the best possible way. Music, most
of the time, is about sexuality, whether you are straight, gay
or in between. It's about love and sex. That's rock 'n' roll.”