A Marine, His Religion, and His Roommate 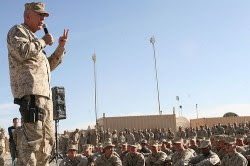 In an interview yesterday, Marine Commandant General James Conway asserted that — given their machismo and religious beliefs — his Marines should not have to share quarters with another Marine that is openly gay without their consent. He stated that, "in some instances we will have people that say that homosexuality is wrong and they simply do not want to room with a person of that persuasion because it would go against their religious beliefs."
Perhaps it's time to applaud Gen. Conway's care and recognition of the religious beliefs of the brave men and women serving our nation. I believe such precedence may do more to assist other faithful and macho Marines as well. As Gen. Conway points out, "[the Marines] recruit a certain type of young American, a pretty macho guy or gal, that is willing to go fight and perhaps die for their country." If we don't take care to honor the religious concerns of our macho Marines, who will fight or die for America?
What I am left wondering, however, is if we should force our pretty Macho Marines to share quarters with someone of other persuasions as well, like those who are black, Latino or Asian? Maybe the presence of a Muslim Marine is objectionable to one just trying to live macho-y without being openly confronted by someone that they find religiously objectionable.
Seriously, who could sleep, play video games, or clean their weapon when they have to live with someone objectionable to them? Policies that force a servicemember to hide their identity and lie as much as possible only serve to strengthen the cohesion of our fighting forces. Just imagine: you're trying to enjoy your down time in your room, in walks your roommate, and they just can't relate with your desire to only mate with someone of the opposite sex. Who could live with that, let alone focus on their wartime mission? You would have to spend all day and night praying that they don't end up persuading you, too.
Perhaps the General should conduct a complete and thorough study on how a macho Marine could be "persuaded" to be gay in the first place. If the Commandant of Machismo believes that a Marine being open about who they are is so unwanted or disastrous, maybe he should make this study his top priority before he retires. We wouldn't want this problem to weaken the tenure of the next Commandant, do we?
On the other hand, maybe he should consider the persuasion of Colin Powell, John Shalikashvili, Wesley Clark, hundreds of other U.S. military leaders, and the 25 countries around the world (including our NATO allies) who have absolutely no problem with openly gay servicemembers. Something he might be capable of doing, since Gen. Conway's did state that if "Don't Ask, Don't Tell" is repealed by Congress and the President, he'll follow the law immediately and without hesitation.
Photo credit: isafmedia
http://gayrights.change.org

Jay Breneman is an Army veteran, having served for 6 1/2 years, with 3 years overseas, including two tours in Iraq.