Equality and inclusion makes the President more of a Christian and an American. 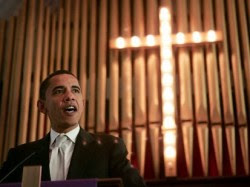 Pew Research caused quite the stir last week when they released a survey showing that 18% of Americans believe Barack Obama's a Muslim, a myth that has haunted the President since the 2008 election.
Though the Muslim angle's interesting, this survey's as much about what Obama "is" — a "Muslim" — as what he "isn't," a Christian. And, astonishingly, only 34% of Americans believe him to be a Christian, a 14 point drop since March of 2009.
Naturally the right wing has been going wild over the survey, and, as happens when church and state mix, the LGBT community has been pulled into the fray.
Hoping to convince more people that the Commander in Chief isn't of the Christian faith, the conservative website LifeSite News attempted to highlight the President's "non-Christian" proclivities, like the "fact" that "the administration has been pandering to the homosexualist lobby."
This so-called pandering includes celebrating gay pride, pushing for the Employment Non-Discrimination Act and hate crimes legislation and "disavowing" the Defense of Marriage Act. Of course, gay people see things a bit differently: the President hasn't been as much of an ally as many anticipated, but that doesn't matter to Obama's conservative opponents: any pro-gay support crosses the line, and, according to them, makes him less of a Christian.
The President and his team have tried to stay away from the Pew Poll: Faith advisor Joshua DuBois released a statement, telling the Washington Post, "While the president has been diligent and personally committed to his own Christian faith, there's certainly folks who are intent on spreading falsehoods about the president and his values and beliefs."
Rather than trying to placate the public, the President should make more of an effort to not only describe his faith, but to tell people that supporting LGBT equality doesn't make him less of a Christian. On the contrary: supporting equality and inclusion makes the President more of a Christian and, ultimately, more of an American.
Photo credit: SenorGlory's Flickr. http://gayrights.change.org

Andrew Belonsky is a journalist living in New York City.