Gay Baiting Voters Deep In the Heart of Texas 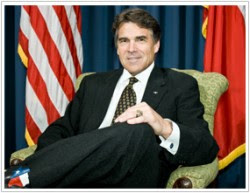 Campaigns and elections are all about choices. This woman, or that woman. This party's candidate, or that party's candidate. This career politician, or that maverick political upstart.
But Texas Gov. Rick Perry, who is in the race for his life to hold onto the state's top office, has a different choice he'd like to present to voters. Since Gov. Perry is a career politician, having served as Governor of the state for more than a decade and in statewide politics for ten years before that, it's hard for him to argue that he's a political upstart. So what's a candidate left to do?
Gay bait some voters big time.
Gov. Perry was speaking at a barbecue in Temple, Texas, and he asked those in the crowd to make a decision. "Would you rather live in a state like this, or in a state where a man can marry a man?"
No word on whether he took an empty beer can and crushed it on his forehead afterwards.
The Texas GOP platform made national news earlier this year, when it came to light that the official Republican Party position in the Lone Star state is not only against marriage equality, but in favor of arresting gay people solely because of their sexual orientation. How very .... Uganda of them.
But Gov. Perry's latest missive isn't his first foray into gay baiting for votes. Take a look at the script of a robocall that his campaign ran last November, when Gov. Perry was running in a primary election against current Texas Sen. Kay Bailey Hutchinson.
"With the president making homosexuality a protected class by signing the hate crimes bill, and Congress poised to vote on socialized health care, do you feel it is critical for more people to earnestly pray for our leaders? If yes, press 1. If no, press 2," the robocall said. I'm guessing it left off the "Press 3 if you'd like to vomit at this type of politics" option.
The conventional meme about election season 2010 is that social issues are on the backburner and that this is an election that will be steeped in bread and butter economic issues. While there's a convincing argument to be made there, Gov. Rick Perry has me thinking "hogwash" today.
Don't get me wrong. I'm ecstatic that more people support LGBT equality on both sides of the political aisle than ever before, and that on a national level, the GOP is being challenged in new ways to embrace LGBT Americans. But for every Ted Olson or Margaret Hoover or Ken Mehlman who comes out for gay rights, there are far too many Rick Perrys willing to undercut them. Meaning that gay baiting for votes is still alive and well.
There's no word on whether Rick Perry got an answer to his question of "Would you rather live in a Rick Perry-led Texas than in a state where a dude can marry a dude?" But I'm hopeful that while that question might fly in the backyard of a wealthy Temple, Texas resident, most Americans would answer that question with a resounding, "I'll take the equality option, please."
Photo credit: governor.state.tx.us