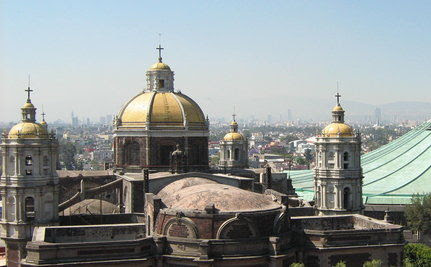 An extraordinary ruling by the Mexico Supreme Court earlier this month, upholding the constitutionality of an earlier law which allowed gays to marry and adopt children, is now under serious fire from the Catholic Church in Mexico.  The Archbishop of Guadalajara, Cardinal Juan Sandoval Iniguez, has been particularly outspoken, claiming that the mayor of Mexico City bribed the Supreme Court to hand down a ruling that favored gay rights.

The Church and the Mexican government have had a tormented relationship ever since the government restricted the Church's powers in the mid-nineteenth century.  Over the course of the early twentieth century, the government passed increasingly strict restrictions aimed at reducing the Church's influence over state affairs.

Article 130 of the 1917 Mexican Constitution, which prohibits church members from participating in political affairs (i.e. campaigning, running for office, etc), struck a severe blow to the Catholic Church's power, and its reinforcement in the late 1920's by the current president, an atheist,resulted in a bloody war between Church supporters and the government in which many priests were killed.

This meant, although the restriction was modified in 1992, that although Mexico has the second largest Catholic population in the world, it is also one of the most secular states in Latin America.  The Church, however, may be ready to change that.  Although Mexico City's mayor, Marcelo Ebrard, is suing Cardinal Iniguez for defamation, the Church has no desire to back down.

If we see that something is unfair or contrary to national law, even if the constitution says we can't, we think we have to speak out," Father Hugo Valdemar, spokesperson for the Mexico City Archdiocese, said to the BBC.  He claimed that Article 130 renders religious officials "second class citizens," their freedom of expression curtailed.

However, in a pattern that will not surprise anyone who is familiar with the contemporary Catholic Church, the population, while nominally Catholic, seems to have quite different views on sexual and reproductive rights than their religious hierarchy.  "This comes out of the desperation of the Catholic Church hierarchy, who haven't been able to mobilise the population against these reforms," explained Professor Roberto Blancarte, who teaches church-state relations.

These lawsuits are not likely to go away soon, nor are the Church's allegations, so we'll keep following this issue - but for now, let's hope that the Church is unsuccessful in its threats against the newly upheld gay rights legislation