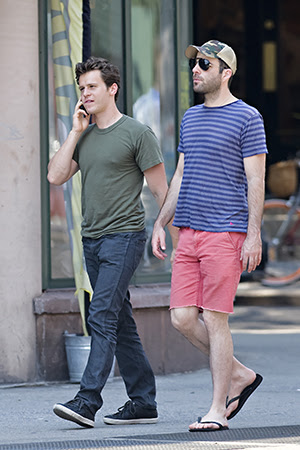 Zachary Quinto and Jonathan Groff, June 2012 (Splash News)Zachary Quinto and Jonathan Groff have called it quits as a couple, several outlets report, although they apparently have been dunzo for a while now.
The "Star Trek Into Darkness" star and the "Glee" guest actor broke up last spring, according to Gossip Cop and Us Weekly. While both outlets report that they remain good friends, Perez Hilton claims that things did "not end well." The couple reportedly started dating in early 2012.
Us Weekly points out that it was distance that put a strain on the relationship. "Zach being away and filming was not easy on them," a source tells the mag. "Now he's going to be in New York with his new play ['The Glass Menagerie']. They really loved each other, so it wasn't an easy split."
As mentioned, the thespians are on friendly terms. According to JustJared.com, Quinto went to see Groff perform recently on stage (Groff appeared this spring in L.A. Theatre Works's production of the play "Red," as well as a one-night only benefit performance of "The Pirates of Penzance" in NYC on June 10).
But the couple hasn't been photographed together since back in February, when they were seen out walking their dogs together in Boston. Quinto was snapped walking the pups with a mystery man in NYC in early June.
It's been a tough week for Groff, who is best friends with "Glee" star Lea Michele. He reportedly flew immediately to be by her side in the wake of her boyfriend Cory Monteith's death on Saturday. Groff — who was also friends with Monteith — and Michele met when they co-starred on Broadway together in 2006's "Spring Awakenings." He was previously romantically linked to Broadway star Gavin Creel.
Groff is currently in production on "Glee" showrunner Ryan Murphy's film version of Larry Kramer's "The Normal Heart." Next, he'll be shooting a new series for HBO about the contemporary gay male experience living in San Francisco (which some have called "the gay 'Girls'"), in which he plays a video game designer who's looking for love on OKCupid. He recently gave an extended interview to the San Francisco Chronicle talking about his upcoming projects.
This was the first significant gay relationship for Quinto since he came out of the closet in October 2011. The actor acknowledged in a blog post on his personal website that he was motivated to do so by the suicide of teen Jamey Rodemeyer. "In light of jamey's death," he wrote, "It became clear to me in an instant that living a gay life without publicly acknowledging it - is simply not enough to make any significant contribution to the immense work that lies ahead on the road to complete equality."
Omg! reached out to reps for both actors about their breakup. Groff's rep has "no comment" and Quinto's rep has not yet replied as of publication.
By Jeremy Blacklow | omg!