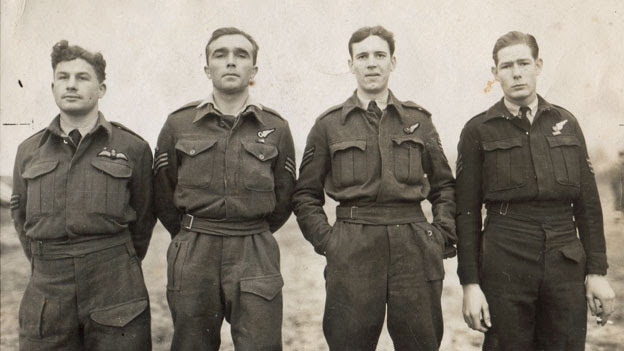 Nearly 70 years after they died, the four men of the crew of an RAF bomber will be buried with military honours at a ceremony in Italy. One was a young poet who had himself written poignantly about the pain of losing air force comrades.
All the men served in 18 Squadron, based near Rimini, in the north of the country, in the last days of World War ll.
One evening in April 1945, they took off on a mission to attack a bridge on the River Po, then carry out a wider reconnaissance.
By this time, the Allies had been fighting their way up through Sicily and the Italian peninsula for nearly two years.
Rome had fallen the previous summer.
Now, further north, German resistance was finally collapsing, and soon the Italian dictator, Benito Mussolini would be dead.
The men aboard the Boston bomber were all very young. The oldest was only 21.
If they could have survived just 10 more days they would have seen the Allied victory in Italy.
And with the coming of peace in Europe shortly afterwards, their lives would have stretched out before them.
But they never returned from their mission. It is believed their plane was brought down by German anti-aircraft fire, and that everyone on board died in the crash.
Now, 68 years after they were killed, the crew is being laid to rest at a Commonwealth war cemetery in the city of Padua. 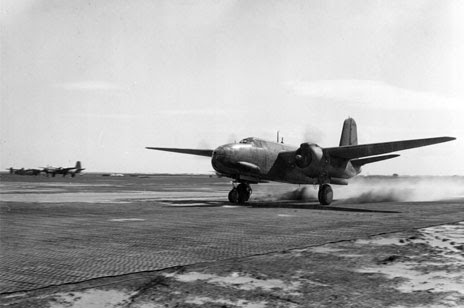 A Boston bomber of the kind flown on the fateful mission to the Po valley
As relatives of the men look on, the strains of the Last Post will drift across the hundreds of white headstones in the cemetery.
Three of the flyers were British - the pilot, Sergeant David Raikes, the navigator, Flight Sergeant David Perkins, and the wireless operator and gunner, Flight Sergeant Alexander Bostock. They were all aged 20.
The crew's other gunner was an Australian - Warrant Officer John Hunt, of the Royal Australian Air Force - who was a year older.
The wreck of the plane was found by an Italian group called Archeologi dell'Aria - amateur enthusiasts who have so far found 16 missing aircraft. 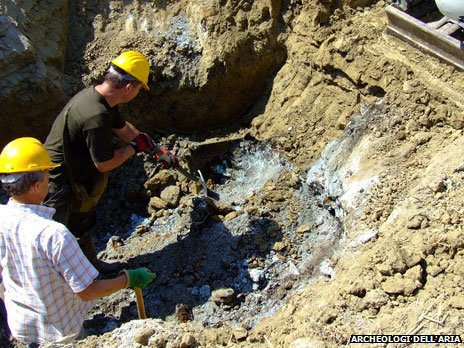 The organisation's founder, Fabio Raimondi says a local man in his hometown of Copparo, near Ferrara, once told him a story about a plane coming down in nearby farmland at the end of the war.
The wreck had burned for two days, then the carcass was picked over for some of its more valuable metal.
But at some point it seems that either German or Italian forces covered much of the wreckage in the crater that the crash had caused.
Items recovered from the wreckageContinue reading the main story 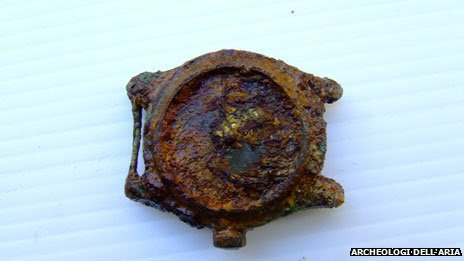 The watch that belonged to Warrant Officer John Hunt
Continue reading the main story
"During the search, we found - in among the melted aluminium - a watch," says Raimondi.
"To my amazement, I discovered that on its back there was a number.
"I went online, typed it in, and I got to the Australian National Archive. I found out who he was... and that he had been missing in action."
Raimondi says that as he and his team dug down and worked to retrieve the remains of the crew, he thought of the relatives of the men who had never come home. 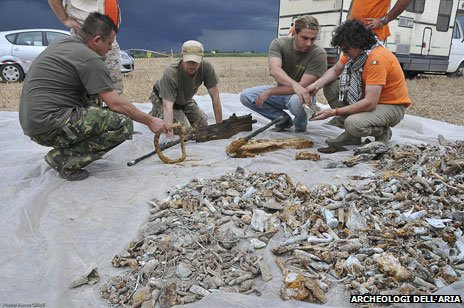 "It was very emotional, the work of several months for us volunteers," he says.
"To find and identify the remains of four flyers is very important. With the funeral we close this circle."The pilot, David Raikes, was an aspiring poet, and his family published some of his work posthumously.
Among the poems was a piece called Let it be hushed, in which he reflected on the loss of comrades - other crews that had failed to return from missions.
Continue reading the main stor
Raikes wrote:
These men knew moments you have never known,
Nor ever will; we knew those moments too,
And talked of them in whispers late at night;
Such confidence was born of danger shared.
We shared their targets, too; but we came back.
As the poem continues, it touches on the black humour that helped the crews cope with the continual danger of death, as in this joke about a dead flyer's watch.
... Someone said
'It was a pity that he wore his watch;
It was a good one, twenty pounds he said
He'd paid for it in Egypt. Now, let's see,
Who's on tonight. Ah, Taffy - you've a good one!
You'd better leave it with me.' And we laughed.
Cold were we? Cold at heart. You get that way.
Towards the end of the poem, Raikes writes about the rituals that were followed when a crew failed to come back to base.
... At first just overdue,
Continue reading the main story
Till minutes changed to hours, and still no news.
One went to bed; but roused by later crews,
Asked 'were they back yet?' And being answered 'No',
Went back to sleep
One's waking eyes sought out the empty beds,
And 'Damn', you said, 'another kit to pack.'
I never liked that part. You never knew
What privacies your sorting might lay bare.
I always tried to leave my kit arranged
In decent tidiness. You never knew.
On the night of that raid on the bridge on the Po, back at base, as the "minutes changed to hours", comrades would have asked of David Raikes and his crew, "were they back yet?" 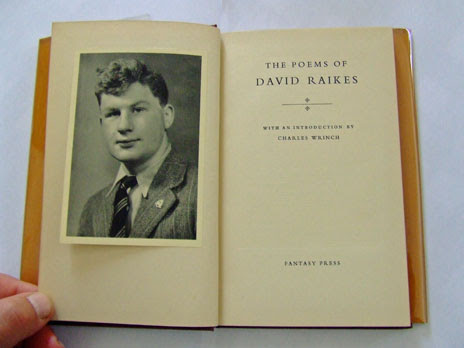 A poetry prize honouring Raikes is awarded at his old school, Radley College
And, eventually, the time would have come to pack his kit.
Raikes' poem will be read out at the funeral by his nephew, and his brothers Roger and Tim will be among those listening at the graveside.
The piece begins with the words:
Let it be hushed, let the deep ocean close
Upon these dead...
Now, in that cemetery in Padua, where they will lie forever, the Italian earth will close upon David Raikes and his fellow flyers.
By Alan JohnstonBBC News, Padua
Over 5.6 Million Reads Adam Gonzalez at July 17, 2013

Email ThisBlogThis!Share to TwitterShare to FacebookShare to Pinterest
Labels: Gays In Military