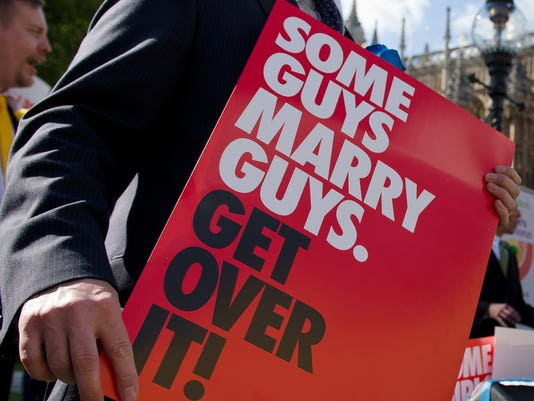 Britain's gay marriage bill has cleared its last major hurdle, passing through the House of Lords and prompting celebrations from campaigners outside Parliament.
Supporters of the bill in Parliament's upper house wore pink carnations Monday as the Lords agreed to send it back to the House of Commons, where lawmakers will review government amendments before it becomes law.
That is expected to go without a hitch, as the House of Commons earlier passed the bill 390 to 148.
The bill will enable gay couples to get married in both civil and religious ceremonies in England and Wales, though the Church of England, which is divided on the issue, is barred from offering same-sex ceremonies.
Currently, same-sex couples can form civil partnerships, which carry similar rights and responsibilities to marriage
~~~~~~~~~~~~~~~~~~~~~~~~~~~~

Legislation to introduce same-sex marriage has completed its passage through the House of Commons, paving the way for the first gay weddings in England and Wales next summer.
The government legislation is now due to get royal assent later this week, after which it is likely to become law. It is expected that the first gay and lesbian wedding ceremonies will take place by summer next year.
Jubilant gay rights campaigners were celebrating the successful passage of the Marriage (Same Sex Couples) Bill through the House of Lords - and vowing to take the fight for marriage equality to Scotland and Northern Ireland.
But opponents of gay marriage warned that the controversial Government-backed reform would "come back to bite" Prime Minister David Cameron. During the two hour debate in the Commons tonight, Tory former defence minister Sir Gerald Howarth accused the Government of bulldozing the "wretched" legislation through Parliament despite it offending large swathes of the Conservative Party.
Sir Gerald, who previously said the "aggressive homosexual community who see this as but a stepping stone to something even further", warned people who do not agree with gay weddings could feel inhibited from expressing their true views on marriage.
The Tory added pamphlets which questioned same-sex marriage had been seized by parliamentary authorities ahead of a meeting he had organised - further heightening his fears of how people against the Bill will be treated.
Earlier today Deputy Prime Minister Nick Clegg told campaigners celebrating outside Parliament that the new law would ensure that lesbian, gay, bisexual and transgender (LGBT) people felt "recognised and valued, not excluded". Openly gay Labour peer Lord Alli told fellow members of the second chamber - some of them sporting pink carnations: "My life and many others will be better today than it was yesterday."