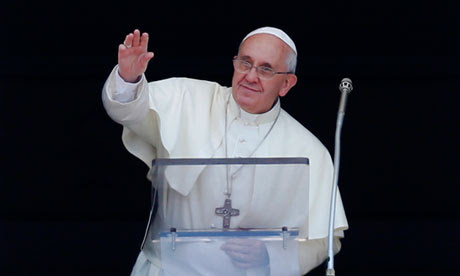 Pope Francis: his judgment has been questioned after a priest he put in a senior Vatican post was named in a gay sex scandal. Photograph: Max Rossi/Reuters

This article was just posted by The Gurdian in the UK
Pope Francis will fly out of Rome on Monday, leaving behind the latest controversy to engulf the Holy See – a slew of gay sex claims, denied by the pope's spokesman, against the man Francis chose to be his representative at the Vatican "bank".
On 15 June, the pope appointed Monsignor Battista Ricca, an Italian cleric and former Vatican diplomat, to be "prelate" of the bank, formally known as the Institute for the Works of Religion (IOR). As such, Ricca is entitled to attend meetings of both the bodies that oversee the scandal-ridden IOR's operations – its board and a five-strong commission of cardinals. The prelate can also demand to see any document he cares to inspect.
According to the latest edition of the weekly news magazine L'Espresso, Ricca has a past punctuated with scandal. Its report, which the pope's spokesman branded as "not trustworthy", claimed Ricca lived more or less openly with a Swiss army officer while at the Holy See's nunciature (embassy) in Uruguay. It said he arrived with his lover and, while running the post between nuncios, provided him with both accommodation and a job.
The weekly magazine said Ricca was once beaten up in a gay bar in Montevideo and that, when the lift at the nunciature broke down in the night, firefighters called to deal with the emergency found him inside with a local rent boy known to police. It said that, after he was transferred to Trinidad and Tobago, that his alleged lover left trunks behind in Uruguay containing his effects. When they were opened later, they were found to contain a pistol, large numbers of prophylactics and sizeable quantities of pornography, the magazine said. Ricca has not made any comment on the allegations.
Catholic teaching regards homosexuality as "objectively disordered" and homosexual acts as "contrary to natural law". It condemns discrimination against gay men and women on the grounds of their sexual orientation, but says they are "called to chastity".
L'Espresso responded to the papal spokesman's partial denial with a statement in which it stood by its Vatican expert's report. It called on the Holy See to "check the trustworthiness of what L'Espresso published simply by consulting the exhaustive documentation on the case in its possession".
That points to the key questions in the affair: whether Pope Francis knew of the claims against Ricca before he handed him one of the most sensitive jobs in the Vatican. And if not, why not? After he was recalled to Rome, Ricca served in the Vatican's secretariat of state before being given charge of first one, and eventually three, of the guest houses that the Holy See uses to accommodate church dignitaries on visits to Rome.
It was at one of these that the future pope met the Italian cleric. Their friendship was cemented after the pope's election when Francis decided not to occupy the lavish papal apartments in the Apostolic Palace, but to remain at the guest house, run by Ricca, in which he stayed during the election.
It would have been standard procedure for him to call in Ricca's personal file before making the appointment and – whatever the truth or otherwise of the claims against him – it is inconceivable that he would have gone ahead had he known about them. It is hard to imagine a more dangerous official for the pope than one charged with shaking up the IOR, yet acutely vulnerable to blackmail.
What remains unclear is whether Vatican allies wiped Ricca's file clean of allegations after his return to Rome, or whether enemies of the pope's reform programme stripped them out before handing the dossier to Francis in an attempt to discredit both him and the programme. The IOR is already caught up in a separate scandal over an alleged plot to use it for the return to Italy of €2m (£1.7m) of evaded taxes.
by John Hooper
Over 5Million Reads Adam Gonzalez at July 21, 2013