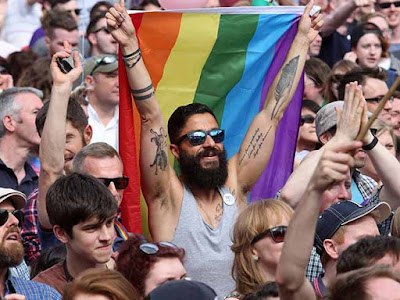 PREVENTING same-sex couples from marrying is a breach of their human rights, a rally in Belfast heard.
Around 20,000 people crammed the city centre on Saturday afternoon demanding "marriage equality".
The march was organized in the wake of the 'Yes' vote in the Republic which is set to legalize marriage for homosexual couples - and leave the north as the only part of Britain and Ireland where gay marriage remains illegal.
Derry-born actor and singer Bronagh Gallagher sang with Quire - Belfast's LGBT choir - at the city hall event also attended by Snow Patrol front-man Gary Lightbody.
The main demonstration followed a march from Ulster University on York Street and was organized by Amnesty International, the Irish Congress of Trade Unions (Ictu) and the Rainbow Project.
Speaking to the crowd, head of Amnesty International in Northern Ireland Patrick Corrigan said it was "the most beautiful march" the city had ever seen.
He used the platform to say:
"Marriage equality is a human rights issue.
"Human rights are very clear on the issue of equality. Article 1 of the Universal Declaration of Human Rights says: 'all human beings are born free and equal in dignity and rights'.
"So it is simply unacceptable for the state to discriminate against people on the grounds of their sexual orientation or gender identity.
"Amnesty International believes that states should end discrimination on this basis and instead ensure that all families are equally protected before the law."
Politicians including the SDLP's Alex Attwood were among the thousands to take part in the march.
Mr Attwood said the rally "sent a very strong message to legislators".
"There is now a need for a new approach by the parties in Northern Ireland whereby the rights of the LGBT community are not only recognised but also endorsed in legislative form," he said.
"To date, government has dragged its heels on the issue of LGBT rights - evidenced by the current blood ban and by the conscience clause bill brought forward by the DUP.
"The overwhelmingly positive referendum held recently has showed that the tide is changing in relation to equal marriage in Ireland - the north is now clearly off-step with the rest of the UK in that regard."
The assembly has rejected a proposal calling for the introduction of gay marriage after debating the issue for a fourth time.
Sinn Féin said equality rights for same-sex couples must be shared by citizens in the north and it will continue to campaign for the reform.
Other high-profile supporters of the campaign include singer Brian Kennedy and Olympic boxer Paddy Barnes.
Simon Cunningham
irishnews.com