While Nobody was Watching Mexico’s Supreme Court Legalized Gay Marriage 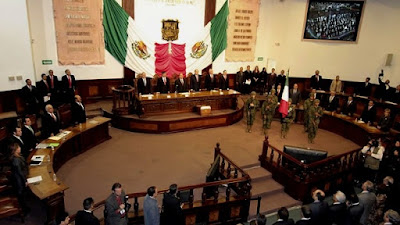 His church turned him away, his family discouraged him from a public fight and the government of the state where he lives vowed it would never happen.
But it did. Hiram Gonzalez married his boyfriend, Severiano Chavez, last year in the northern state of Chihuahua, which, like most Mexican states, technically allows marriage only between a man and a woman.
Mr. Gonzalez and dozens of other gay couples in recent months have, however, found a powerful ally: Mexico’s Supreme Court.

In ruling after ruling, the court has said that state laws restricting marriage to heterosexuals are discriminatory. Though the decisions have been made to little public fanfare, they have had the effect of legalizing gay marriage in Mexico without enshrining it in law.
“When I heard the judge pronounce us legally married, I burst into tears,” said Mr. Gonzalez, 41, who, like nearly all gays marrying in Mexico, needed a court order enabling him to exchange vows.
As the United States awaits a landmark decision on gay marriage by the Supreme Court, the Mexican court’s rulings have added the country to a slowly growing list of Latin American nations permitting same-sex unions.

Argentina, Uruguay and Brazil already allow same-sex marriage. Chile plans to recognize same-sex civil unions this year; Ecuador approved civil unions in April; and Colombia grants same-sex couples many of the same rights extended to heterosexual married couples.
“It’s a huge change from where things were 10 years ago,” said Jason Pierceson, a professor at the University of Illinois at Springfield who studies gay marriage trends in Latin America.
The shift in Mexico, the second largest country in Latin America after Brazil, is the product of a legal strategy that advocates used to bypass state legislatures, which have shown little inclination, and often hostility, to legalizing gay marriage.

In 2009, Mexico City, a large liberal island in this socially conservative country, legalized gay marriage — a first in Latin America. There have been 5,297 same-sex weddings there since then, some of them couples coming to the city from other states.
Of the nation’s 31 states, only one other, Coahuila, near the Texas border, has legalized gay marriage. A third state, Quintana Roo, where Cancun is, has allowed gay unions since 2012, when advocates pointed out that its civil code on marriage did not stipulate that couples be one man and one woman.
In most of the rest of the country, marriage is legally defined as a union between a man and a woman — laws that may remain on the books despite the court’s decisions.
The Supreme Court upheld Mexico City’s law in 2010, adding that other states had to recognize marriages performed there.

Advocates of gay marriage saw that as an opportunity to use the court’s rulings to assert that marriage laws in other states were discriminatory.
The court — taking into account international decisions and antidiscrimination treaties that Mexico has signed — has steadily agreed, granting injunctions in individual cases permitting gay couples to marry in states where the laws forbid it.

A major turning point occurred this month when the court expanded on its rulings to issue a decree that any state law restricting marriage to heterosexuals is discriminatory.
“As the purpose of matrimony is not procreation, there is no justified reason that the matrimonial union be heterosexual, nor that it be stated as between only a man and only a woman,” the ruling said. “Such a statement turns out to be discriminatory in its mere expression.”
The ruling, however, does not automatically strike down the state marriage laws. However, it allows gay couples who are denied marriage rights in their states to seek injunctions from district judges, who are now obligated to grant them.

“Without a doubt, gay marriage is legal everywhere,” said Estefanía Vela Barba, an associate law professor at CIDE, a university in Mexico City. “If a same-sex couple comes along and the code says marriage is between a man and a woman and for the purposes of reproduction, the court says, ‘Ignore it, marriage is for two people.’”

The Roman Catholic Church, often an influential force socially and politically in a country that is 83 percent Catholic, objected to the ruling, saying the court had flouted two millenniums of convention.
“We reiterate our conviction, based on scientific, anthropological, philosophical, social and religious reasons, that the family, cell of society, is founded on the marriage of a man and a woman,” Msgr. Eugenio Lira Rugarcía, secretary general of the Mexican bishops’ conference, said in an email on Sunday in response to the decision.
He added that the church’s position is “stated in the millennia of Western legal tradition, collected and deepened throughout our history by legislators and judges from very different schools of thought and ideologies.”

In Mr. Gonzalez’s case, the Supreme Court had already ruled that the law in Chihuahua State was unconstitutional, enabling the couple to get an injunction so that their marriage could go forward.
State officials in Chihuahua vowed to never legalize same-sex marriage, and Mr. Gonzalez said he was expelled from his local church for being gay.
He and his husband refused to go to Mexico City to get married because they believed they should have that right in the state where they pay taxes.
The principle, he said, was important.
“It is not just the legal battle, but what it involves, the emotional and physical strain of the process,” Mr. Gonzalez said. “At the end, it’s a fight for your dignity.”
Alex Ali Mendez, a lawyer and gay rights activist with Mexico Marriage Equality, took on a case involving three couples from Oaxaca State in 2012, using the Supreme Court’s arguments to challenge the law in that state.
“We opened the door in Oaxaca, and we are now opening it in different states,” Mr. Mendez said.
Bureaucratic hurdles, and sometimes hostility, remain.
Civil registry authorities abiding by state laws can still block couples hoping to marry.

It is up to the couples to appeal to the courts, a process that can cost $1,000 or more and take months. Although gay rights advocates are spreading the word, many couples remain unaware that they have a strong legal case to get married.
José Luis Caballero, a constitutional scholar who directs the law school at the Iberoamerican University in Mexico City, said that even though judges must now rule in favor of gay couples, full equality has yet to be reached.
“What has to happen is that the state laws have to be reformed so that couples have the same rights and they don’t have to spend time and money,” he said. “A couple with resources can get married. A couple without resources can’t.”
Victor Manuel Aguirre, 43, and Victor Fernando Urias, 38, in January faced down protesters and bureaucratic roadblocks in Baja California before, with the power of a court injunction, they became the first gay couple to marry there.
At one point, they could not get into the civil registry building because of demonstrators.
“We were both dressed in white and went back home completely defeated and humiliated and just cried our eyes out,” Mr. Aguirre said.
After news media coverage of the fracas, the mayor of Mexicali called them and said that there had been a misunderstanding and that they could marry.
“With many setbacks, love triumphed after all,” Mr. Aguirre said.


Mr. Mendez, the lawyer pressing these cases, said the next step in the legal process was compiling enough injunctions in each state to reach a threshold under which the court could formally order state legislatures to rewrite their laws.
But experts said that Mexico had already reached a watershed.
“It certainly looks like there will be more marriage equality in Mexico in the near future,” said Professor Pierceson. “We don’t know if there will be any backlash or counter protest to stop it.”