The MTA is still struggling to close their capital budget deficit of $14 billion, calling on both City and State governments to step up their spending to help maintain, repair and expand the subway network that serves as this city's life-sustaining circulatory system. But a new report commissioned by City Comptroller Scott Stringer's office claims the city contributes far more cash to the agency than previously thought—in fact, according to the report, the amount New Yorkers contribute in taxes is the equivalent of a so-called $130-per-month "invisible fare" for each household, and it's time for the state and federal governments to chip in more. 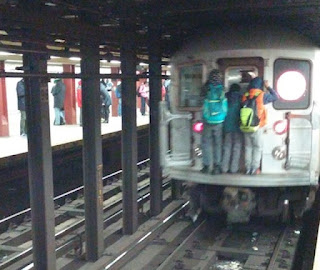 The city as a whole contributes about $10.11 billion to the MTA annually, according to the report, with $5.31 billion coming from the fares and tolls we pay, and $4.801 billion sourced from taxes and subsidies. The MTA, meanwhile, "only" spends $9.86 billion on riders: $6.808 billion of that goes to New York City Transit while the rest is distributed among bridge and tunnel upkeep, the Long Island Railroad, buses, Metro-North, the Staten Island railroad, and debt service.
This means the MTA actually spends less money on New Yorkers than New Yorkers spend on the MTA. The report also notes that the MTA made about $325 million more in revenue than in operating costs in 2014.
So what's up with all these budget constraints?
The MTA's 2015-2019 Capital Program proposed spending $15.5 billion on the subway aloneover the next five years, with plans to purchase new subway cars, replace track, and upgrade stations, among other improvements. But that $15.5 billion doesn't even cover completing the 2nd Avenue Subway, which may never be completely finished—and other mega projects that would considerably alleviate current commuter woes.
There's also the issue of the MTA's $34.1 billion debt, with the agency's heavy borrowing stretching all the way back to 1982. A fully funded Capital Program would permit the MTA to move forward with necessary repairs and projects without relying on further borrowing, according to the authority.
Governor Cuomo didn't seem to agree, calling the Capital Program "bloated" and thus far failing to provide the authority with the necessary funds. This has been an ongoing issue this year, and in order to alleviate what the MTA claims is a dire financial situation, earlier this month MTA Chairman Thomas Prendergast called on the city to help out by giving the authority $300 million annually. The de Blasio administration has agreed to give the MTA $125 million annually, up from $100 million.
Stringer's report, however, uses fares and tolls to suggest the city contributes far more than $100 million per year, a claim with which the MTA takes issue. "It is incredible that the Comptroller acknowledges in the very first paragraph of his report that 'the MTA needs more funding from every level of government,' but uses fuzzy math to justify letting the city off the hook for using some of its billions in future surpluses to pay its fair share for mass transit," the MTA said in a statement.
Stringer, who is also displeased with our dirty subway stations, might make it seem like the city's off the hook, but the report doesn't let the state or federal governments get away with underfunding the MTA. The report points out that the State only offered $603.5 million to the MTA in 2014, making up about 4 percent of its operating budget. The federal government, meanwhile, has pledged $6.8 billion to the 2015-2019 Capital Plan, an amount Stringer says is $1.6 to $4.6 billion too little to keep the agency afloat.
"As a critical engine of our regional economy, the MTA deserves support from every level of government," Stringer said in a statement. "But any conversation about how to fill the MTA’s budget gap must acknowledge that the City already contributes more to the MTA than it gets back in services, and that Albany must step up to the plate with greater support.”
Straphangers Campaign president Gene Russianoff seems to agree with Stringer's assessment that the state needs to step up to the plate:

The Straphangers Campaign agrees with the central finding of New York City Comptroller Scott Stringer’s just-released report on MTA funding, “The Invisible Fare.” He concludes that “despite the State’s sole governing authority and the tremendous MTA-related economic benefits that are spread across New York, the State’s contribution to the operating budget is” inadequate. We hope that the report can help revive progress on getting the MTA and its millions of riders a fully funded, five-year capital program.

You can peruse the whole report here [pdf], and be sure to tell your state representatives and Governor Cuomo to stop robbing the MTA of badly needed funding and figure out a way to come up with more cash for a 21st Century subway system.
Contact the author of this article or email tips@gothamist.com with further questions, comments or tips.
Rebecca Fishbein in News
Over 5Million Reads Adam Gonzalez at June 03, 2015