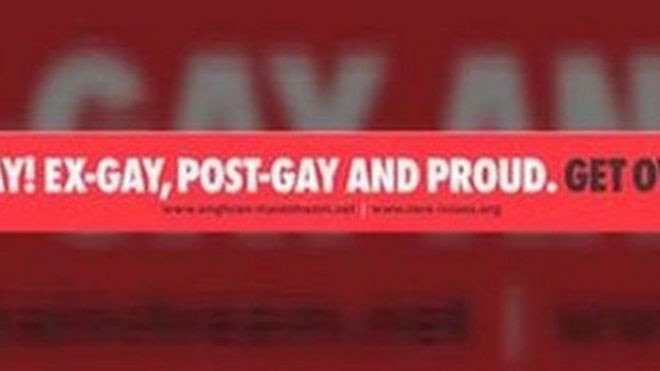 A Christian group has failed in a bid to overturn a decision to ban its bus adverts, which suggested gay people could be helped to change their sexuality.
The group, Core Issues, was ordered to pay £100,000 in legal costs after the High Court rejected its case.
It was trying to challenge a Transport for London (TfL) ban of its posters, which read "Not Gay! Ex-Gay, Post-Gay and Proud. Get over it!".
Core Issues vowed to continue fighting.
The 2012 campaign was a response to a bus poster campaign by gay rights group Stonewall, saying: "Some people are gay. Get over it!".

In March 2013, the High Court ruled the TfL ban was lawful because displaying the advert would "cause grave offence" to those who were gay.
But Core Issues argued that London mayor Boris Johnson, as TfL chairman, had ordered it to impose the ban for the "improper purpose" of seeking votes from gay people to help him win re-election.
The Court of Appeal ordered a further investigation, and High Court judge Mrs Justice Lang cleared Mr Johnson of any wrongdoing last July.
However, returning to the Court of Appeal, Core Issues argued the judge had not properly considered the evidence that Mr Johnson had "instructed" TfL to impose the ban.
But Lord Justice Sullivan said although there was an amount of "puffing" by Mr Johnson, the ban was "certainly not unlawful" and refused a fresh appeal.
Andrea Williams, chief executive of the Christian Legal Centre, said later: "It does not finish here. It is all a whitewash."
Referring to the fact that Core Issues now faces a £100,000 legal expenses bill from TfL, Ms Williams said: "This is intimidation. It is an extortionate amount of costs against somebody seeking to do good.”
BBC
Over 5Million Reads Adam Gonzalez at June 13, 2015

Email ThisBlogThis!Share to TwitterShare to FacebookShare to Pinterest
Labels: London, Pray away the gay