There have been some controversial departures from the state-run English-language channel RT in recent years but this is the first time since the beginning of the Ukraine crisis that a high-profile correspondent from a major terrestrial channel has criticised his employer so publicly.
In an interview with the independent news site, Meduza, Mr Goldenzweig said he was ousted from NTV shortly after giving the interview on June 8 to the Phoenix channel, in which he said that Mr Putin felt “insulted” for being excluded from the G7 meeting of leading states in Bavaria.
He said he had already decided to leave NTV at the end of July after becoming disillusioned with his work, but he was forced out early after the general director of the channel became enraged at his interview comments.
“I am truly ashamed of what I have been doing for the last year and a half,” he told Meduza.
Before autumn last year Mr Goldenzweig had managed to avoid politicizing his reporting, producing frequent dispatches about German culture, but he then started to get frequent orders for crude propaganda from Moscow, he said. 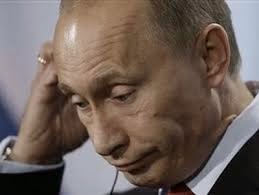 He was told to report that anti-homophobia activists who criticised Mr Putin in Europe were part of a “dirty campaign against the tsar-daddy” and that Angela Merkela, Germany’s chancellor, was a puppet of the US, Mr Goldenzweig explained.
Another task was to report on demonstrations in Germany of what the reporter called “some freaks” who supported Novorossiya, the word Mr Putin has used to describe areas of Ukraine he believes are Russian.
Russian state television reports that have been dismissed as false include one that said Ukrainian officials crucified a three-year-old boy, and another that claimed Malaysia Airlines Flight MH17 was shot down last year by a Ukrainian jet.
Mr Goldenzweig said an objective report he filed about Germany offering compensation to former Soviet prisoners of war was changed to say German officials had deliberately delayed the initiative so that the people concerned died out and there would be less to pay.
He said that he had gradually learned to compromise with himself over producing propaganda but that, “eventually a firm conviction appeared that I was doing something that was not right”.
“It was not just a question of conscience,” he told Meduza. “It's simply that you were trained for one trade - journalism - and you find yourself at times doing something completely different. And you realise that the longer you do this rubbish, the harder it will be to get out of this rut."
Mr Goldenzweig said that he had been left with 352 euros in his bank account after losing his job and expected he would now be unofficially banned from Russian television. But he said he was glad to have “cleansed my karma”.
In a Facebook post about a collection of his reports on NTV, said: “I apologise for my shameful participation in this disgrace.”
He added: “That’s it, I’m off for a disinfection.”
telegraph.co.uk

By Tom Parfitt
Over 5Million Reads Adam Gonzalez at June 17, 2015