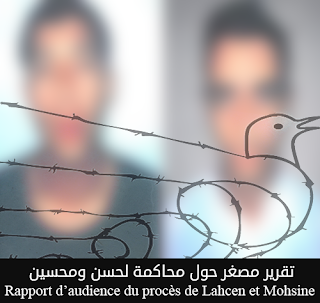 Two Moroccan gay men have been sentenced to four months each in jail after they were arrested for standing too close to one another as they posed for a photograph in front of a historic site in Rabat.
Lahcen, 38, and Mohsine, 25, whose surnames the Guardian is not publishing in order to protect their identities, were found guilty on Friday of homosexuality and obscenity, in a trial described by activists as grossly unfair. Under Morocco’s anti-gay laws, they were also condemned to pay a fine of 500 dirhams (£33).
The pair were jailed earlier this month after holding each other for a photograph near Hassan tower, Rabat’s famous minaret, and a popular tourist spot.
The men were sightseeing and taking pictures as Lahcen, who is from Rabat, showed the capital to Mohsine, who was on his first visit to the city from his hometown of Marrakech in the west of the country.
“These men will be spending the next months behind bars for one, and only one, reason: being gay,” said Aswat Collective, a prominent LGBT group in Morocco, which has campaigned for their release. “We are outraged by this injustice.”
Their arrest coincided with heightened sensitivities in Morocco about pro-LGBT activities. In last week’s issue of Maroc Hebdo magazine, it asked on its cover: “Should we burn gays?” The gay rights debate has polarised Moroccan society, which is still heavily rooted in conservative attitudes.
Mohsine and Lahcen’s case has been linked to a separate incident that took place at Hassan tower a day before their arrest. Two topless French activists, from the feminist group Femen, were arrested and immediately deported from Morocco after kissing each other in the same place in Rabat.
The authorities suspect that Mohsine and Lahcen were copying the French activists, something that the men have since denied. Femen’s protest act has caused outrage among conservative Moroccans, prompting protests in front of the French embassy in Rabat. “This is Rabat, not Paris,” demonstrators shouted.
Mohsine and Lahcen have allegedly been subject to physical and mental abuse while in jail, said Aswat. A number of journalists were denied access to the trial. Aswat has also condemned the Moroccan ministry of interior for revealing the identities of the two men on national television, which has led to demonstrations in front of their families’ houses.
Lahcen’s mother has expressed fear for her son’s ability to survive in Morocco after his release from prison, now that his identity has been made public, Aswat said.
“The sentencing of Lahcen and Mohsine to four months in jail is a tragic reminder that discriminatory laws have real consequences,” said Andre Banks, executive director of All Out, a global movement for equality, referring to article 489 of Morocco’s penal code which requires six months’ to three years’ imprisonment for homosexuality.
“We will continue to work with our partners in Morocco until both innocent men are free – and until being gay is no longer a crime. No country should imprison its citizens because of who they love,” said Banks. More than 55,000 have signed All Out’s online petition, urging the Moroccan authorities to release Mohsine and Lahcen.
The human rights campaigner, Peter Tatchell, said their detention fit the recent pattern of crackdown on LGBT activists in Morocco and was likely to damage the country’s international reputation as a tourist destination.
“There seems to be an escalating crackdown on gay and bisexual men in Morocco. A moral panic is being whipped up about homosexuality, aided by sections of the media,” he said. “These are just the latest of several arrests in recent months. In this case, and some others, there is no evidence of same-sex acts. Lahcen and Mohsine appear to have been arrested for the mere expression of affection, which is technically not a crime under Moroccan law.”
Tatchell added: “Male homosexuality is widespread in Morocco. Until recently there was a de facto toleration of same-sex relations, providing they were private and hidden. The intensifying repression coincides with more gay Moroccans coming out and the emergence of online gay publications and chat rooms.”
Saeed Kamali Dehghan
theguardian.com
photo:FaceBook
Over 5Million Reads Adam Gonzalez at June 23, 2015