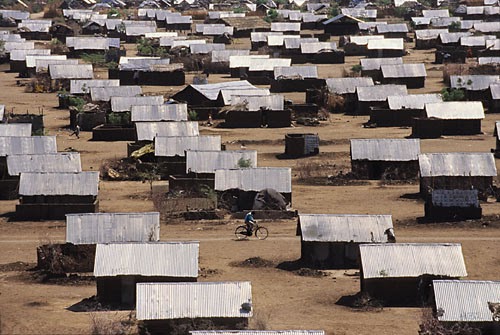 There are many problems currently brewing in Kenya for Ugandan refugees who, after fleeing homophobia and persecution in Uganda, have been caught in a quagmire of funding and fraud issues. What follows is a desperate plea written by Ugandan refugees in Kenya, whose plight has been exacerbated by recent ‘people trafficking’ fraudsters who have descended on UNHCR pretending to be LGBTI seeking refuge and resettlement. This sparked a temporary slowing down of an already very slow process and funding insecurities that have resulted in the further compromising of the refugees’ safety.
Some Ugandan LGBT refugees are living in Kakuma camp, some are housing themselves in a local slum, and others have found housing in neighborhoods in Nairobi. The charitable organization HIAS has been providing monthly stipends to refugees to help with housing. Many are terrified that the support has now stopped and fear that they will be unable to pay their rents, forcing them into Kakuma Camp where they are not protected from the general homophobic heterosexual refugees, who have persecuted them in a manner similar to that which they are escaping.
Here is the plea put out by a group in Kenya today who are saying that they represent 300 Ugandans now seeking refuge. There is no verification that these 300 are all truly LGBT. It is the job of UNHCR, with very little funding and resources to try and verify cases for resettlement. While the grievances are valid, one cannot ignore the fact that UNHCR has a mammoth task with not enough resources to see it through.
Ugandan LGBTI refugees from Kakuma camp and parts of Nairobi Kenya protested outside the UNHCR offices in the Nairobi capital of Kenya on Wednesday the 11th of March and delivered a set of demands.The protest turned rowdy when UNHCR staff called police who dispersed the refugees.However that did not deter the determined refugees from reading out their demands. As of 12am this morning more than 35 refugees are sleeping over until their demands are taken care of.
This is the protesting refugees’ statement:
AN URGENT APPEAL TO THE UNITED NATIONS, TO INTERNATIONAL LGBTIQ COMMUNITY AND TO FRIENDLY STATES AND TO OTHER EMPATHIZERS
We the LGBTIQ community of three hundred or more asylum seekers and refugees mainly from Uganda living in Kenya, and who face severe challenges, now wish to appeal to the international community, to LGBTIQ groups, organizations, funders, individuals and all persons of good will, to assist us directly, or assist UNHCR and its implementing agency HIAS to in its provision of services to us.

Students attend class in crowded classroom at Kakuma refugee camp (Photo courtesy of UNHCR)
The gaps in provision of protection and humanitarian services to LGBTIQs migrants by the UNHCR, the long delays for interviews and resettlement have resulted in several life threatening challenges to the LGBTIQ migrants living in Kenya. We sometimes feel that we are not listened to by the UNHCR and HIAS Kenya, but simply told what is being done for us and how it ought to be appreciated.
Our real concerns seem to fall on deaf ears, or are met either with incredulity or with defensive reproaches or accusations of misconduct by some LGBTIQ migrants. Often we are told that we are NOT a special case and should not presume to expect special treatment, while in reality we are treated differently by the security forces and general public, who single us out, stigmatize and persecute us for no other reason than for who we are.
This is causing us to lose confidence in the UNHCR and its implementing agency HIAS Kenya and indeed in the process of resettlement itself. We need to know and to feel that they are really able and committed to assisting us. While we appreciate many efforts and initiatives already taken by UNHCR when our crisis of displacement began, we fear that now some negligence or incompetence or ignorance on their part will result in the injury or incarceration or even the loss of lives of one or several of our members.
THE DILEMMA
In Kenya we face a dilemma. On the one hand we left Uganda due to a situation which was either life threatening or untenable. Arriving in Kenya last year, we learnt that we do not in fact qualify for asylum, since our perceived ‘lifestyle-option’ is in breach of existing Kenyan laws which prohibit ‘unnatural’ sexual acts. We cannot however return to Uganda. … (See footnote for ‘Background to Exodus’)
Kenya government authorities, have agreed to give asylum and refugee status to us ‘’exceptionally’’ on condition that UNHCR would facilitate our speedy resettlement to third states as a ‘durable solution’. To date no more than thirty of us have been resettled to friendly states outside Africa (since February 2014) while most of us await interviews for eligibility or determination of status which have been pushed forward many months. We are grateful that ‘friendly states’ have offered some places for us for resettlement notably the United States, Canada, Scandinavian countries however many more places need to be availed urgently in view of our situation in Kenya and our numbers which exceed two hundred and are growing. There are also other non- Ugandan LGBTIQ forced migrants in Kenya, whose cases are only now being examined.

Somali refugees at Kakuma refugee camp (Photo courtesy of ITVS)
Our ‘legal-illegal’ status in Kenya renders us vulnerable to abusive acts by both security forces and the general public. In the refugee camp at Kakuma we have faced violent attacks and harassments by other refugees and so we are not able to stay there yet there is pressure both by the state and now indirectly by UNHCR it seems for us to return there. We appeal to the international community to intervene NOW on our behalf to stop this.
OUR IMMEDIATE CONCERN
Our immediate concern is that financial assistance has been suddenly (and unilaterally) withheld or withdrawn or curtailed from Ugandan LGBTIQ asylum seekers and refugees, by UNHCR and HIAS Kenya.
One reason given is the need to limit or to ‘’investigate some fraudulent claims’’, which UNHCR seemed blissfully unaware of until we alerted them. These claims were being processed because of weak procedures and some in competencies by the UNHCR. We are dismayed that the whole LGBTIQ migrant community is to suffer for that.
Another reason given is lack of funds.
We are aware that funds have been committed and donated to UNHCR and HIAS specifically for the LGBTIQ case-load from Uganda. We have no idea how much was sourced, or committed, or from whence it came, or how it was disbursed. We are simply told that there is no money and that we should look for jobs. Apart from this being illegal, we do not speak Kiswahili. Some of us are transgender or otherwise ‘’socially unacceptable’’ due to our appearance and mannerisms. Lack of funds will result in homelessness, hunger, prostitution, violence and insecurity.
Furthermore we are not able to go to the refugee camps as has been suggested, since we have already suffered violent attacks there from other refugees. This whole situation is unacceptable, unbearable, unnecessary and abusive.
TEN URGENT RECOMMENDATIONS
1. LGBTIQ forced migrants whether urban or otherwise should be consulted about all decisions affecting their lives. Unilateral decisions by UNHCR and HIAS always result in insecurity or chaos
2. Ugandan LGBTIQs migrants should be represented or employed by the UNHCR and HIAS to assist its work with us.
3. Financial assistance to the urban case-load should not only be maintained but increased from the present 6000 shillings to 10,000 shillings a month per person (125 US dollars). We are still a small group and believe that it is possible. Further appeals for emergency funding should be made to the UN Geneva, to friendly states, to donors, and to the international LGBTIQ community since the situation still warrants it.
4. LGBTIQ migrants should be assisted to start enterprises without withdrawing current assistance as has been suggested by HIAS
5. ‘’Fraudulent claims’’ should be investigated with due diligence and without out penalizing those whose claims at ‘’prima facie’’ seem genuine. The approach of ‘’tarring all with the same brush’’ is unjust.
6. Interviews for eligibility should be brought forward and speedily concluded, giving rejections where necessary.
7. An international agency or department, be set up specifically for, by and of LGBTIQ migrants( similar to how HIAS was initially set up for Jews) to co-ordinate ongoing worldwide resettlement of displaced sexual minorities which is on the increase especially in Africa..
8. All LGBTIQs should be treated in the same way without favor or fear, or discrimination, by agencies. We are against the policy of divide and rule and believe that we all have the same needs and goals.
9. No Ugandan LGBTIQ should be compelled directly or indirectly to stay in the camps at Kakuma or Dadaab.
10. More training and consultation should be given to UNHCR and HIAS on how to manage Ugandan LGBTIQ clients. Much greater sensitivity and understanding is required.
We ask for the international community to listen to our appeal and to intervene to promote dialogue with the UNHCR and to facilitate assistance to us, as we have no-one else to turn to at this time.
For further details contact:
1- Kamarah Khan on +254 701616479 Email: apollokmrh@gmail.com
2- Nelly Otim on +254 772 145898
Over 5.6 Million Reads Adam Gonzalez at March 24, 2015