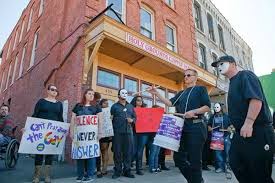 The last few years have seen a significant tidal change in favour of LGBTI rights throughout the West. Although Australia's parliamentarians drag their feet on marriage equality, the United States, has seen the legalisation of same-sex marriage in 36 states as well as the striking of the military's Don't Ask Don't Tell provision. This progress has come about despite active and well-funded opposition.
Unfortunately, the positive advances have been tempered by saddening regression elsewhere. The common response of Western observers to anti-gay measures- such as Uganda's "kill the gays" and Russia's "gay propaganda" laws- has been to blame the allegedly inferior culture of these countries.
Not only is this assumption bigoted, it is downright wrong.

A gay rights activist in Uganda. Photo: AFP
The erosion of LGBTI rights in African and Latin American countries, as well as in Russia, has occurred with the support and outright incitement of cashed-up religious groups based in the US.


"But the tide has turned and these groups are no longer the political powerhouses they once were. They have had to export their particular brand of intolerance and have managed to find a strong foothold in countries like Uganda and Russia.”
According to the Southern Poverty Law Centre (SPLC), there are six key groups at the forefront of attacks against LGBTI people: the World Congress of Families (WCF), the Alliance Defending Freedom (ADF), the American Center for Law and Justice (ACLJ), Catholic Family and Human Rights Institute (CFAM), Family Watch International (FWI), and United Families International (UFI).
As their names suggest, these groups attempt to insert their ideology across the world under the banner of freedom and family, even as they lose territory at home.
Of course, they adhere to a very narrow interpretation of the biblical family, one with heterosexual parents and the father as the natural head of the household. In such a family unit, the woman's primarily role is mother and the role of LGBTI people is non-existent.
Their tactics have been two-pronged: to attack the reproductive rights of women and to rail against homosexuality. Regarding the latter, John Oliver humorously exposed the role of American religious groups in Uganda when he broadcast a clip of a local activist passionately declaring "God made Adam and Eve not Adam and Steve".
But what these groups are doing is no laughing matter.
According to the SPLC, under the guise of "protecting the natural family", these organisations have "in one way or another, sanctioned the idea of criminalising gay sex."
In Belize, for instance, The ADF (with an annual budget of $30 million) and the CFAM provided lawyers to advise a local anti-gay coalition. Belize has an anti-homosexuality law, known as Section 53, that prescribes a 10-year sentence for "carnal intercourse against the order of nature".
In 2010, LGBTI activists launched a challenge to the law, prompting the religious right to financially support local anti-gay groups determined not to see this relic of Britain's colonial-era "anti-buggery" laws overturned. According to the SPLC, while the ADF shies away from publicly sharing its activities in Belize, it has previously expressed support for Section 53, and other laws criminalising homosexuality.
Interestingly, the religious right uses different tactics in each region it works in. When Russia passed its anti-gay law in 2013, it seemed to come out of nowhere. Yet, the roots go all the way back to 1997 when Allan Carlson, the founder of the World Congress of Families, was invited to Moscow by two sociologists concerned by what they termed a "demographic winter" – the fear that Russia's white, Orthodox population would soon be overtaken by its indigenous Muslims (who form 15 per cent of the population) and by non-white immigrants.
His response was to present "the family" as the solution to Russia's so-called demographic problems. In practical terms, this necessitates both anti-abortion measures (which were duly signed into law by president Medvedev in 2010), and hostility towards sexual diversity.
While the family was offered as the answer to Russia's fears of being swamped by Muslims and brown people, in Africa it is –ironically- presented as a magic salve that will defeat "Western imperialists" who are determined to "abort African babies" and impose homosexuality.
Meanwhile, these groups have even formed alliances in Muslim-majority countries (including some where Christianity is banned), like the so-called Baptist-burqa network, that also work to undermine the rights of women and gays.
The result is a world where women's sexual and reproductive health and the rights of LGBTI people are increasingly threatened.
How do we counteract this regressive agenda?
First, we must disavow ourselves of the notion of cultural superiority. The ambitions of these groups supersede any cultural or religious divide as they seek to elevate their narrow view of the family in every region of the globe.
Second, it is vital to look at women's rights and LGBTI rights as two sides of the same coin. Comments such as those recently made by Madonna and Patricia Arquette that position these as different arenas are not only misguided but dangerous because they do not recognise that attacks on women and LGBTI communities occur largely for the same reasons.
Lastly, religion need not be hostile to the rights of women and LGBTI people. "There are many different ways to understand faith," Caroline Lambert, executive officer of the Australian YWCA (a global Christian organisation, although the Australian chapter is secular), who is in New York to attend the Commission on the Status of Women, says.
"The bible at its heart is about compassion and human rights. It is about recognising the dignity of all humans [and] recognising expressions of sexuality in all its diversity."
Secular progressives can and should work with faith-based organisations that are sympathetic to women's and LGBTI rights. While the religious right claims to adhere to the Bible, Lambert says her organisation begs to differ.
"We're here because the religious right has colonised God," she says. "But God is so much more than they make God out to be."
The World Congress of Families and the Alliance Defending Freedom were approached for comment but declined to respond.