One in Five Kids Have been Victims of Homophobic Bullying 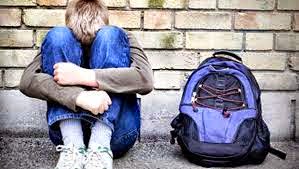 Gay pupils across the country are being subjected to homophobic bullying at the hands of their teachers, according to research published today.
One in five gay teenagers said they had been bullied or discriminated against by a teacher or another adult at school on the basis of their sexuality, in what was described as a “sad but accurate” picture of the reality faced by young gay people growing up in Britain.
The research also strongly suggested that poor sex education lessons are driving a rise in the number of young gay men contracting HIV, according to the head of the National Aids Trust charity, which produced the report.
The survey, the largest of its kind ever conducted in the UK, questioned more than 1,000 gay or bisexual males aged between 14 and 19 about their experience of sex and relationship education in school and their knowledge of HIV, as well as asking whether they had been bullied.

More than half (55 per cent) said they had experienced bullying and discrimination due to their sexual orientation. Of these, 99 per cent said they had been targeted by another pupil, while 75 per cent said they had been the victim of online bullying. More than a third (39 per cent) said a teacher or another adult at school had been responsible, a statistic which researchers described as “even more concerning” than the others.
“It’s an incredibly high number,” said Deborah Gold, the chief executive of the National Aids Trust. “The idea that teachers or other adults at school are sometimes responsible for bullying and discrimination is utterly unacceptable. It’s definitely an area I’d want to know more about. It’s a worryingly high enough statistic that you’d want to find out how that is impacting on young people.”
The report, Boys Who Like Boys, also uncovered worrying levels of ignorance about HIV among young gay men. A “significant proportion” did not understand how the virus is transmitted, researchers said, while almost three quarters were unaware of the drug PEP, which can prevent infection if taken up to three days after a person is exposed to HIV.
Three-quarters of those surveyed said they had not received any information, advice or support about same-sex relationships and attraction in sex and relationship lessons at school, while a third had not been educated about HIV transmission and safer sex. More than two-thirds had not been given information on testing for the virus.
Ms Gold said the lack of proper education about same-sex relationships was likely to be fuelling the rise in young men contracting HIV. According to Public Health England, new HIV diagnoses among gay and bisexual men in the UK reached a record high in 2013, while among those aged 15 and 24, diagnoses have doubled in 10 years.
“That the majority of the people that filled in this survey are leaving education not knowing how to protect themselves from HIV is shocking,” Ms Gold said. “The number of young men who have sex with men who are contracting HIV is increasing. I think there’s an absolute link between the lack of this education at a time when people need it and the consequences of that.”
Although schools in England are obliged to teach pupils about HIV and Aids as part of the science curriculum, campaigners say the approach is “patchy”. Government guidelines state schools should also cover the issue in personal, social and health education classes, but the subject is not compulsory. In Wales, compulsory sex education was introduced in 2002, but in Scotland there is no statutory requirement for schools to teach it.
Young gay men often use pornography as a source of sex and relationship information, the study found. “Pornography may serve an affirmative or reassuring function for some as depictions of same-sex relationships a in mainstream culture are often absent,” the researchers added.
James Hanson, 24, who was diagnosed with HIV at the age of 18, said poor sex education lessons caused many young gay people to rely on porn for advice about relationships. “Turning to one of your best friends and explaining that you have these feelings is a scary thing to do. But porn is the safe place to go, where you can hide your tracks and be anonymous,” he said.
Ruth Hunt, chief executive of gay rights group Stonewall, said the findings were “a sad but accurate representation of the situation that many young gay men face growing up in Britain today”.
She added: “Training is essential to ensure all school, college and local authority staff are equipped to spot and tackle homophobic, biphobic and transphobic bullying – not just between students, but among staff too.”
Case study: 'School let me down'

James Hanson believes he would not be HIV-positive if he had been better educated
James Hanson, 24, from  Surbiton in south-west London, was diagnosed with HIV at the age of 18.
When I was 14, I was outed by one of my best friends. I was treated really badly. I wouldn’t do PE any more because the guys would make comments, saying I was perving on them. People wouldn’t want to partner with me in class. There was constant name-calling. It was such a traumatising time that I ended up going back in the closet for many years.
All I can remember of sex education was at the age of 13 being told about the act of a man and woman having sex, and about using condoms – that was it. There was nothing about STIs nor any mention of same-sex relationships. Being gay, it was incredibly isolating. You feel like: ‘I’m not included in this – I’m not quite sure where I fit in’. Since the teacher never spoke about it, you think maybe it’s wrong to feel like that. So you have to do research online or chatting to close friends. I didn’t feel like there was an adult at school who I could approach.
If I had been better educated, I’m 99 per cent sure I’d have acted differently. HIV and Aids was not on the radar at all. If it was ever mentioned it was as a joke, ‘the gay disease’. There are a lot of people out there who are still ignorant about it. I’m not surprised by some of the survey’s results because I know how the education system failed me. But I’m still disturbed there are so many young people going through the system who are not getting the information they need to live their life properly.”

Exclusive from Independent.co.uk
by CHRIS GREEN
Over 5.6 Million Reads Adam Gonzalez at March 09, 2015