This Gay Theologian Invites Gays to Join The Church in Unions Without Sex..You know Like they do! 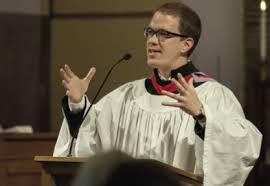 Here are questions from AL.com, and answers from Hill:

Do you think sexual intercourse between two people of the same gender can be good in the eyes of God?

The historic Christian teaching is that marriage is meant to be a lifelong covenantal union between a man and a woman that is open to bearing and raising children. Alongside that, celibacy is another worthy calling. These two together—both marriage and celibacy—are the only pathways that the Bible and the Christian tradition have recognized for the stewarding and purifying of oThis Gay Theologian Invites Gays to Commit without Sexur wayward human desires. This is because both marriage and celibacy are ways of pointing to Jesus' love. Marriage points to the persevering, permanent way Christ loves the church. And celibacy points to the fact that one day marriage will cease to exist, as Jesus teaches in Matthew 22:30, and that all of us will enjoy an eternity of perfect love.

What are the reasons you have chosen to be open about a homosexual orientation?
Gay and lesbian people don't just exist "out there," far removed from our churches. Rather, many of us are Christians--we are already "insiders," members of various churches and Christian communities. I felt that it was really important for more Christians, especially conservative evangelicals, to start acknowledging that fact. Staying in the closet can be a bad thing for one's spiritual life. It can intensify shame and guilt. On the other hand, coming out can be a way of experiencing God’s love.

Why have you chosen to be celibate?

Because of what I described above. I believe that the Bible and the Christian tradition don't endorse same-sex sexual activity. So, I am seeking a life of hospitable community, deep friendship, and genuine love in and through my celibacy.

Is that a necessary choice for Christians who consider themselves to be homosexual in orientation?
If someone wanted to enter a same-sex union (or was already in one), I would encourage them to consider whether their love for each other could be expressed without sex. Traditional Christianity urges people to abstain from gay sex, but it does not urge gay people to abstain from loving other people of the same sex! Also, it's important to say that some gay Christians have married spouses of the opposite sex. I wouldn't want to set that up as some kind of norm, but I also don't want to erase those people's stories either.
Over 5.6 Million Reads Adam Gonzalez at March 22, 2015