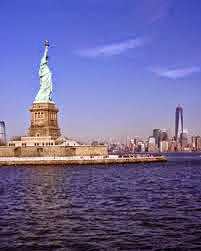 JIS PHOTO
Prime Minister Portia Simpson Miller speaks at the unveiling of the “Ark of Return” - the Permanent Monument to honour the victims of slavery and the transatlantic slave trade at the UN Visitors Plaza, New York yesterday. 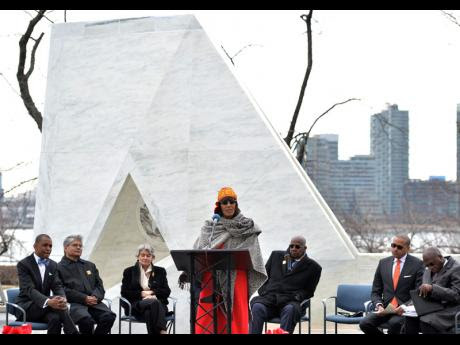 As Simpson Miller tried to defend the indefensible position of Jamaica’s non existing record of protecting the rights of gays, the protestors yelled so.
However, the prime minister did not take kindly to the protestors who were real angry at her for not telling the truth. She most live inside a church or an air bubble not to know what we know here. She got pissed. She most feel that people that don’t have rights in her countries do not have rights here to protest either.
“Nobody never hears the Government of Jamaica beating up gays; not one”, Like I told you, just do a search and is in the public record all the incidents of hate crime and murders coming from this Island.  She went on, "Let me tell you something; you want to disturb, you can disturb, but this woman come here with the blood of Nanny of the Maroons and the spirit of Marcus Mosiah Garvey, and this woman is not afraid of no man, nowhere, anywhere, and I will speak the truth everywhere,” the prime minister said to loud cheers and applause from the audience. Yes that is what she said, full of herself and not caring about the issue of civil and human rights in her country. The speaks like any oppressor does, no we don’t do that, the poor we are being maligned. My mind goes back during Dessert Storm when Hussein took the little boy he was holding hostage and fix his hair, hug him against the poor’s boy’s wishes. h  “You see I love Americans” said Hussein. The kid was not even american but it does ’t matter he made his truth as he went along as so does this Prime Minister of Jamaica.
I ask if she should be worry that we are going to hold fast to not going and spending money in that homophobic country full of ex slaves that should know better. Ex slave nations that now have their own land, they don’t live in Africa they live in their own country they had had the opportunity to build themselves with the help of her old colonial rulers and tourist dollars, lots of gay dollars. I don’t want to hear about boat cruises that stop there for the tourists to leave their money. I remember when gay cruises where not allowed to stop there. I have been to Jamaica and know the score but anybody thru the media can tell what goes on there. It is so incredible that they Jamaican people are such fervent followers of the white man’s religion and with the white men bigotry.
Simpson Miller noted her position and that her People's National Party Government is different from that of the previous administration of Bruce Golding, who famously said he would not allow gays to serve in his Cabinet.
Simpson Miller stressed that she would not be bullied by those who tell lies about Jamaica's treatment of gays.
And she further lamented that Jamaica would not bow to attempts to hurt the country's image with misinformation.
The prime minister said Jamaica respects the human rights of all its citizens, including gays. She added that those who disagreed are not being truthful.
"Jamaica will continue to rise and shine globally. Jamaica will rise and shine all over the world and no one man can stop that," Simpson Miller declared.
In the past, gay-rights advocates have picketed events attended by the prime minister in New York.
They have complained that there have been no real efforts by the prime minister and her Government to follow through on her 2011 election promise for a review of the buggery law and conscience vote among parliamentarians. Gay rights advocates have also blasted the Government, claiming that it has done little to stem the violence and discrimination being faced by gays in Jamaica.
In its 2014-2015 country report, human rights organisation Amnesty International pointed to five areas it says Jamaica needs to improve in.
It lists issues relating to the police and security forces, justice, gender-based violence, children's rights and those of homosexuals.
Amnesty International said police brutality remained a concern, adding that attacks and harassment of lesbians, gays, bisexuals, transgender and intersex people have continued.

However, the human-rights group said Jamaica has taken steps to deal with the issue of impunity.
Adam Gonzalez, using jerome.reynolds as source for this report.
(jerome.reynolds@gleanerjm.com)