The Stability of Gay Couples is Proven Firm by Time 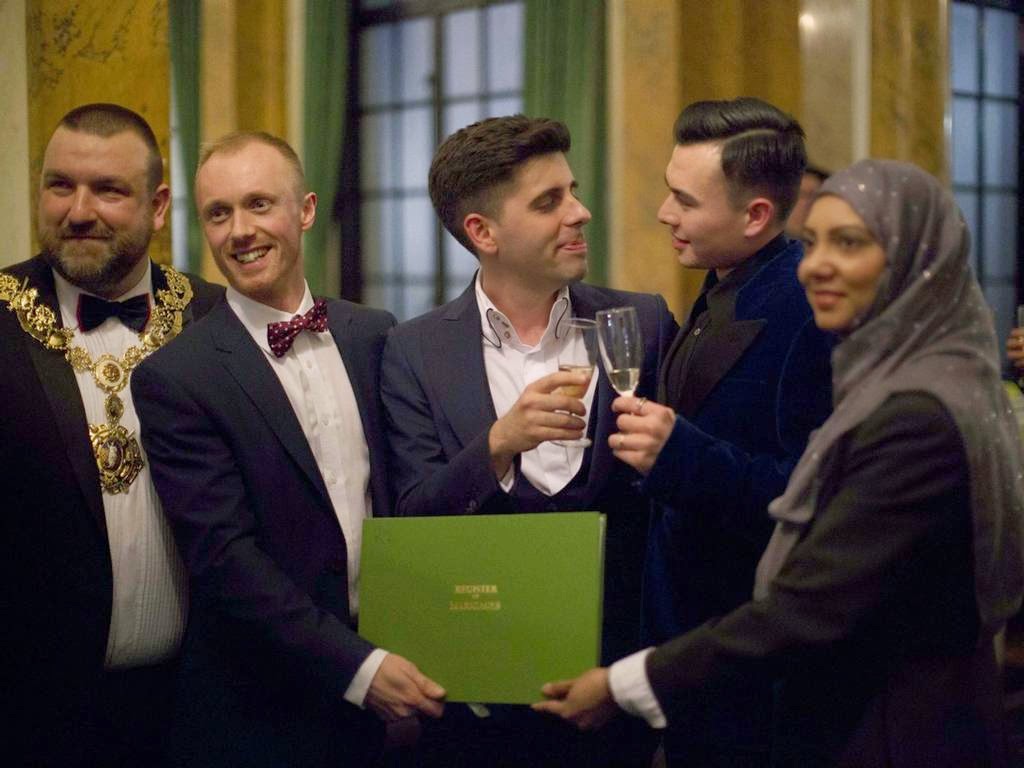 Sue Wilkinson married her partner, Celia Kitzinger, more than a decade ago. But it was only last week, when she received a letter, that it hit home how attitudes to same-sex marriage in the UK have been transformed.
“The letter was addressed to ‘Mrs and Mrs’. That was the first time it has ever happened to us,” said Mrs Wilkinson. “It really brought home what a sea change there has been.”
Today is the first anniversary of the legalisation of gay marriage in Britain. The coalition’s Same Sex (Marriage) Act came into force on 13 March last year, but couples had to wait at least 16 days after giving notice to their local register office before getting married. It was not until 29 March that same-sex couples could finally say “I do” in public.
Mrs Wilkinson, 61, and Mrs Kitzinger, 58, married in Vancouver, Canada, in August 2003, a few weeks after same-sex marriage became legal in British Columbia. After returning to the UK several years ago, the couple, who are both academics, spent years lobbying the Government to have their relationship recognised as marriage. The High Court rejected their application in 2006.

Sue Wilkinson, left, and Celia Kitzinger married in Vancouver, Canada, in August 2003 (Alison Taylor)Their union finally became legal a year ago. “The biggest change has been a symbolic one,” said Professor Wilkinson, a specialist in feminist and health studies in the Department of Social Sciences at Loughborough University. But there have been practical changes too.
“We made a point of referring to each other as ‘my wife’, and people used to be completely baffled by it. Now we can see a flicker of recognition in people’s eyes, she said. “It’s the little things like that which make us very pleased that equality is coming. It was incredibly important that our marriage was finally recognised in our own country.”
At least 1,409 same-sex couples have married since March last year, according to official statistics. Almost 100 had a ceremony in the last three days of March, rising to almost 500 in June. The figures for the rest of 2014 will be published in September.
Peter McGraith and David Cabreza, from north London, had been partners for 17 years before they tied the knot at one minute past midnight on 29 March last year. Choosing to read some of the comments posted online after news of their wedding appeared in the media, Mr McGraith was struck by one in particular: “They’ll be having children next.”
The couple already have two boys aged nine and 13, having adopted them when they were aged two and six respectively. Mr McGraith had taken them to the House of Commons on 5 February 2013 to witness the historic vote on same-sex marriage.

A full-time father, Mr McGraith finds it difficult to conceal his frustration at those who question the stability of gay families. “The hypocrisy centres on notions about the instability of gay relationships with regard to our suitability to bring up children,” he said, “when, actually, the way ‘traditional’ heterosexual marriage is conducted and policed means that their splits are far more acrimonious and more likely to affect children’s sense of stability.”
Mr McGraith believes the “traditional” model of heterosexual adoption will almost certainly change as biomedicine advances. “There may come a time when gay parents are the majority when it comes to adopters,” he said.
Mr McGraith, who is from Lanarkshire, was pleased when SNP leader Nicola Sturgeon announced her support for the creation of a special envoy within the Foreign Office “to promote the rights of LGBTI people throughout the world, as an integral part of UK foreign policy”.
He said: “You need to see people shaking hands around the world and making statements about what’s not acceptable. I feel a genuine connection to gay men in Jamaica or Iran, and we can do something to help people persecuted in more intolerant countries than ours.”

The legalisation of gay marriage was a welcome development, but homosexuals who wed do not yet enjoy the same rights as married heterosexuals, the human rights campaigner Peter Tatchell said.
Gay couples are not guaranteed the same financial benefits as heterosexual couples if their spouse dies.
Mr Tatchell said: “It’s great that we’ve got same-sex marriage but it’s not equal marriage. We now have segregation in marriage law, with two separate marriage statutes: the 1949 Act for opposite-sex couples and the 2013 Act for same-sex couples. Separate is not equal.”
Mr Tatchell said the legalisation of gay marriage had not caused British society to “collapse”, despite “scare-mongering” by opponents. He said: “Life has carried on as normal, with the bonus of thousands of same-sex couples now enjoying the happiness and security of married life.”
Paul Gallagher
independent.co.uk
Over 5Million Reads Adam Gonzalez at March 30, 2015