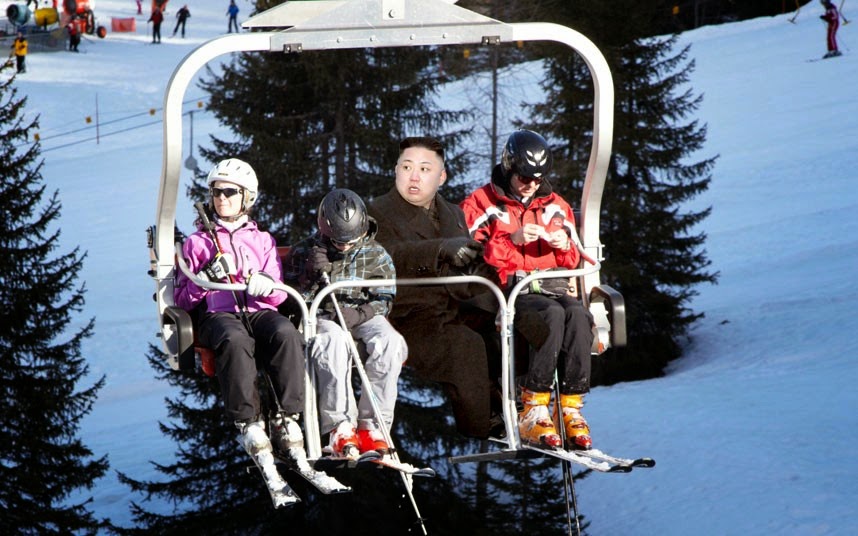 The city of Chongjin, once stricken by famine, is today developing a rather different reputation.
The city is still under the firm grip of the state, but among many North Koreans, Chongjin is now a fashion capital of sorts.
The average person is still poor, but in this emerging capitalist era, this port city is growing in importance as a trading hub. Chongjin has become the first place where foreign fashions arrive.

The omnipresent North Korean leader inspecting new apartment buildings
* North Korean property market
The army is heavily involved in construction, as a source of cheap labour for the building of apartment complexes, hotels, roads, bridges, and so on. Contrary to the popular image of the North Korean soldier as a goose-stepping, brainwashed loyalist and ruthless killing machine, the average military man is likely to spend more time building things than working to crush the “puppet” regime in Seoul. Even state media often refers to them as “soldier-builders.” Military units are now little more than free labour teams.
Some apartment complexes are built with specific tenants in mind — military veterans, star athletes, or scientists, for example. Ministry of Foreign Affairs apartments in Pyongyang are considered rather ritzy, as foreign ministry staff have grown used to such apparent luxuries as round-the-clock electricity on postings abroad, and expect nothing less when they return home. In a country where blackouts are very common and winters brutally cold, 24-hour electricity is a real indicator of who can be considered properly “elite,” and who cannot.
Just as in any capitalist country, apartments in North Korea can be traded. Probably a majority of units in an upmarket newbuild apartment block will be sold on the market, rather than given to the state employees they were officially intended for. The only real difference is the lack of a formal system for apartment transfer, since owning private property is forbidden. If you live in any North Korean city, however, it will be possible to “sell” your apartment: people living in the same district are legally allowed to swap homes, so this may even be done in a semi-legitimate fashion, facilitated by a cash payment, though often, house trading is done without any registration at all. In Pyongyang, where apartment prices have risen more than tenfold since the turn of the century, trading may even be facilitated by an (illegal) estate agent.
Apartments in ordinary areas and without lifts or reliable electricity may change hands for as little as US$3–4,000. Lower floors command higher prices, though. It is generally accepted that the poorer you are, the higher up you live. This contrasts with South Korea, in which the best views are prized. But when there are no lifts — or a power outage can get you stuck in one — the top floor suddenly seems less appealing.
A decent apartment in the central Pyongyang district of Mansudae (which is now jokingly referred to by expats as “Dubai” or “Pyonghattan”) will change hands for US$100,000 or more. There are even those who talk of US$250,000 apart- ments. That is a lot of money to spend on a place that you don’t officially own. But if you have that kind of sum at your disposal in North Korea, you will be able to ensure that it stays yours.

One of the new shops that has sprung up in Pyongyang
* Moonshine and house parties
North Koreans have always enjoyed homemade moonshine. For the majority — especially those in the countryside, and with little or no disposable income — this remains the only reliable option. Typically, homebrewing will be of the most rudimentary form — corn, fruit, or ginseng, left to ferment in a bottle or jar, and buried under a pile of clothes for warmth. The end product can be consumed by the maker’s family, or even sold or bartered with neighbours.
Home-made alcoholic drinks there are typically referred to as nong- taegi (or sometimes nungju). Most housewives know how to make it, and those who do it well become famous within their village. Such ladies will then even be able to turn their moon- shining into a small business, if they wish.
Though nongtaegi is illegal, any efforts to stop its production are utterly doomed to failure. Those whose job it is to eradicate it enjoy it as much as anyone else. And according to one defector, around 80–90 per cent of North Korean men drink every day. There is even a popular song, “Weol, hwa, su, mok, geum, to, il Banju,” which can be translated as “Drink on Monday, Tuesday, Wednesday, Thursday, Friday, Saturday, and Sunday.” North Korean men drink more even than their famously bibulous Southern brethren. Northern women drink much less than those in the South, but this is also starting to change. As working class women are now often the breadwinners, they have much more freedom — but also, more stress to relieve at the end of the day.
Unlike in South Korea, house parties are very common in the North. Those who have attended one will say that the amount of drinking at house parties would put South Koreans to shame. One defector states that she never had as much fun in Seoul as she did at house parties back in her home town. She and her friends would dance to South Korean and Western pop music (see below), whilst knocking back nongtaegi. They would connect a combined USB/DVD/MP3 player to large speakers and play music files obtained via USB drives.
North Korea Confidential is published by Tuttle on April 14
By Daniel Tudor, and James Pearson
telegraph.co.uk
Over 5.6 Million Reads Adam Gonzalez at March 30, 2015