Im Gay But Given the Choice I would be Straight….This Community is Got to Change!


I'm gay, but given the choice would I rather be straight?

There’s never been a better time to be a gay man, says Cristo Foufas, but the judgmental, dismissive nature of the gay community has got to stop. 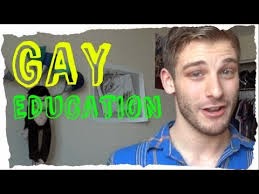 “As a gay man I'd never believe being gay is wrong. But if it were a choice? I'd be straight. Which I'm sure is terribly un-PC, but honest.”
The tweet provoked some strong feelings among friends and followers, so let me explain where I was coming from.
If you’re a single gay man, the last few years have seen a huge change in the way in which you meet men. More equality has brought more freedom, which means we don’t need to hide our sexuality away, secretly cruising parks and toilets after dark. Technology, too, has given us a new way to fulfil our urges and curb our loneliness via dating apps, the most popular of these being Grindr.
“Dating” is, of course, the wrong word to describe the function Grindr provides, as I don’t know many men who use it to look for meaningful committed encounters. These apps aren’t used for dating at all - they’re used for sex. But increasingly, apps like these are the only way gay men meet.
Grindr is a showroom, a shop window; a chance to display your wares via a profile picture and a few words categorising the kind of guy you are. The kind of shoppers you're advertising yourself to are a fickle lot, making instant judgements and snap decisions.
You have a few seconds at most to impress with your photo and your stats before you’re dismissed. It’s brutal. It’s awful. And I am as guilty as anyone of committing such awful brutality.
Which is why find myself asking whether I would be so judgemental, and feel so judged by my own community, if I were straight?
In the gay world you’re either too hairy, not hairy enough, too tall, too short, too defined, not defined enough, too camp, too smooth... the list goes on and on. It’s all just so shallow.
And that’s aside from the label which you have to ascribe to yourself. Are you a jock (athletic)? A bear (hairy/stocky)? An otter (hairy/slimmer)? A daddy (older)? Or a twink (young/smooth)?
Gay men have more bad labels than a branch of TK Maxx. For a community which has spent too many years fighting against discrimination, we spend an inordinate amount of discriminating against each other.
Is the straight world like this? And if I genuinely had a choice, would I choose to live like this?
Just to be clear, I don’t believe your sexuality is a choice, but is something you are born with. It chooses you. But that doesn’t stop me wondering "what if"? And that was the feeling behind my tweet.
The gay community is a jungle. Why are we like that? Why are we so dismissive of those who aren’t perfect in our eyes? Why are we so abrupt?
At the weekend I received a Grindr message. It read simply: “Big cock?” That’s the level of discourse gay men are reduced to on Grindr. I replied with a picture of the large ornamental cockerel in my garden, and was immediately blocked.
Do straight people talk to each other like this, I wondered. Do straight people have a strict list of criteria that they will accept in a partner? I don’t believe they do.
Is it because as gay people we grew up keeping our feelings secret and now we're making up for lost time by cutting to the chase? Do we demand perfection because for so long we felt far from perfect about ourselves?
Has the inner shame of our upbringings, a fear of being judged by others, warped us into judgemental monsters now that our sexual desires are allowed to roam free?
After posting my tweet, my timeline went mad. Some people agreed with me, for various reasons ("No one would choose to be a 2nd class citizen, no matter how liberal the country"), and some disagreed politely ("Totally disagree... I'm happy to be gay, would choose it if I could and think its a blessing").
But others were furious at my disloyalty. They felt I had demeaned the gay community to even think such a thing.
At the other extreme, bigots would say that my question proves their point. That questioning being gay is proof enough that the gay lifestyle is wrong.
But I stand by what I wrote. I think that the judgemental juggernaut that dominates gay culture is deeply unhealthy. It doesn't take a genius to work out that feeling judged constantly can make a person unhappy.
Perhaps this is why gay men are twice as likely to have a mental health problem, or perhaps it even helps explain why nearly half of gay people have considered suicide.
Don't get me wrong; there are countless wonderful things about being gay. It’s also brilliant that in 2014 we have finally got equal marriage, and that being gay continues to be "the new normal".
But let's give each other a break. Many gay men have spent years fighting feelings of not belonging, of not being good enough. The last thing we need is other gay men sticking dumb labels on us and telling us that we're still not up to scratch. If we can move beyond that, hopefully people who are born gay won’t have to wonder whether their life would be easier if they were straight.
By Cristo Foufas
telegraph.co.uk
Over 5.6 Million Reads Adam Gonzalez at December 30, 2014