Gay Man Was the Real thing } I hope the reporting goes that way, Gay people are the most Courageous beings on the Planet 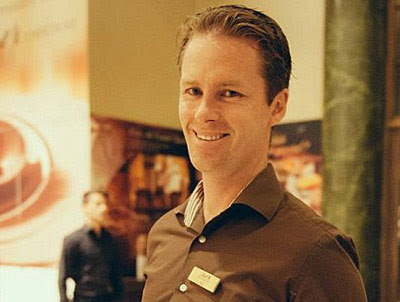 Tori Johnson (Pic: Facebook / Lindt Australia)
The gay man who died during the cafe siege in Sydney has been praised as a hero for his brave efforts to save the hostages.
Tori Johnson, 34, was killed on Tuesday when he wrestled with gunman Man Haron Monis in a bid to allow other hostages to flee.
Monis reportedly shot him in the head at close range as Johnson tried to take the sawed-off shotgun away.
When police stormed the building, Monis was also shot dead.
Another victim, mother-of-three and barrister Katrina Dawson, died in the shoot-out, possibly of a heart attack.
Johnson, who was the manager of the Lindt cafe, is survived by his partner of 14 years, Thomas Zinn.
Johnson’s grieving family said in a statement: “We are so proud of our beautiful boy Tori, gone from this earth but forever in our memories as the most amazing life partner, son and brother we could ever wish for.”
They added: “We feel heartfelt sorrow for the family of Katrina Dawson.”
Steve Loane, CEO of Lindt Australia, said in a statement that Johnson was a much loved and dedicated staff-member.
“By nature he was a perfectionist and he had a genuine passion for the hospitality industry and people. He was a really important part of our management team in Australia and his loss is absolutely tragic,” he said.
Johnson’s bravery is reminiscent of that displayed by another gay man, American Mark Bingham. He is credited with being one of those who fought to save passengers from hijackers aboard a doomed 9/11 flight by rushing the cockpit.
Writing for Huffington Post, James Peron pointed out that while Johnson was a hero, the reality is that he was also a “second class citizen” in Australia, where marriage equality is not yet a reality.
“Tori and his partner of 14 years, Thomas, could never be married, not in Australia. Tori and Thomas deserved the same rights as other Australians. But that right was denied them, and now, for Tori, it’s too late,” he said.
The more than 16-hour-siege of the Sydney CBD cafe left the city and the country in shock.
On Wednesday, Johnson’s family and partner visited the Martin Place pedestrian mall, where thousands have laid flowers and left messages in tribute to the victims.
mambaonline.com
Over 5.6 Million Reads Adam Gonzalez at December 18, 2014