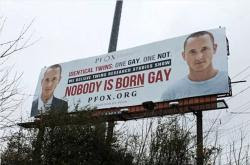 “When I first saw the billboard I remember my ex partner telling me his grandmother never believed that man had gone to the moon. “  Publisher 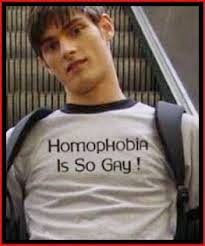 An "ex-gay" group that supports conversion therapy is drawing attention after recently erecting a billboard in Richmond, Va., that says "nobody is born gay," NBC 12 reports.
The controversial billboard, created by the Parents and Friends of Ex-Gays (PFOX), was put up on I-95 in Richmond, Va., and urges that gay people can "turn" straight.
"Identical Twins," the billboard reads. "One is gay, one is not. We believe twins research studies show: Nobody is born gay.”

According to GayRVA (via LGBTQ Nation), PFOX's members say they want to "to educate, support, and advocate for individuals and parents on the issue of same-sex attraction, and to increase others' understanding and acceptance of the ex-gay community."
The organization’s website says, "People deserve to know the truth about the many men, women, and children who have made a decision to change their lives," and that "it's important to remember that sexual orientation is a matter of self-affirmation and public declaration."

But not everyone is OK with the billboard.
"I am shocked and really disappointed that at the end of 2014, we have a billboard in the middle of our city that says that kind of hate," Beth Panilaitis, executive director at Rosmy, an LGBTQ youth organization, told NBC 12.
PFOX references a Northwestern University Department of Psychology study from 2000 on twins, Gay RVA points out. On the group's website, they claim, "there is no gay gene."
"20 percent of homosexual men had a twin brother who was also gay, while 24 percent of lesbian women had a twin who was also gay," PFOX wrote. "Thus 80 percent of gay men and 76 percent of lesbian women had an identical twin that was heterosexual, suggesting an environmental component in the development of sexual feelings and identity."
But the study's author, J. Michael Bailey, took issue with PFOX's interpretation of the study.
"People will often get confused in their terminology. They ask for example is homosexuality genetic or learned? Well, genetic is not the opposite of learned," Baily told LGBT Science. "I think inborn is the opposite of learned. A trait can be completely inborn without being completely genetic. And I think male sexual orientation is a case in hand."
Panilaitis told NBC 12 that the billboard is hurting LGBT youth in Richmond.
"No young person or adult should be walking down the road and see something that says that they are not okay as they are," she said.
A representative for Lamar Advertising Company, the group that owns the billboard, told Gay RVA that PFOX's message "is not a reflection of our company's views."
"It is in the best interest of our company and the communities we serve to accept advertising copy openly," Allie McAlpin, communications director for lamar, said. "We do not accept or reject copy based upon agreement or disagreement with the views presented."
The controversial conversion therapy, which some believe can "turn" a gay person straight, is banned on minors in California, New Jersey and most recently, Washington, D.C.
The billboard is scheduled to run through January 4.

Twin on billboard not a twin but gay

The Raw Story Published the following:

The South African man featured on an antigay billboard in Richmond, Virginia spoke up Thursday saying that he himself is gay and that he does not agree with the billboard’s message.
According to Richmond’s NBC Channel 12, model Kyle Roux spoke up after friends, family and associates brought the billboard to his attention.
The roadside ad was put up by conservative Christian antigay group Parents and Friends of Ex-Gays and Gays (PFOX) and features two pictures of Roux. “Identical twins: One gay, one not. We believe twins research studies show NOBODY IS BORN GAY.”
Roux said that not only is he not a twin, he is an “out and proud gay man.”
“I was obviously quite shocked, so that why I decided to send you guys an email saying hey, I’m that guy in that billboard,” he wrote to Channel 12.
Roux sat for the photo-shoot a decade ago and hadn’t thought much of it since. The images were for a stock image service. He said he was told they’d be used for corporate advertising and publicity materials.
“It just seems like there no place in today’s world for an organization that is promoting this as being some kind of deviant or distasteful lifestyle, because I’ve lived my life openly gay and happy for my entire life,” Roux said. DAVID FERGUSON
Over 5.6 Million Reads Adam Gonzalez at December 13, 2014