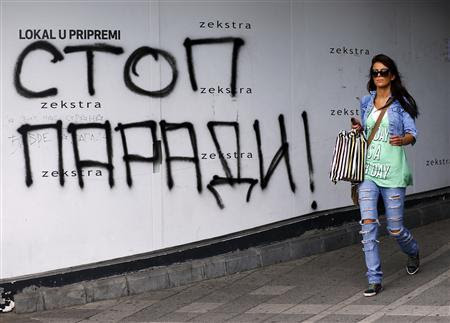 Serbia's government banned gay activists from marching in Belgrade for the third year running on Friday, citing a threat to public safety from right-wing hooligans but risking EU condemnation before the expected start of accession talks.
The last Gay Pride march in 2010 triggered a day of rioting by right-wing nationalists in the capital, Belgrade.
Western ambassadors had heaped pressure on Serbia to allow this year's event to go ahead on Saturday, as a litmus test of the Balkan country's commitment to tolerance and diversity. The EU is due to launch membership talks in January.
But after a three-hour meeting of government leaders and security chiefs, Prime Minister Ivica Dacic said it would not be allowed to proceed.
"After a long discussion on whether the march would pass without severe consequences, the security assessments indicated severe threats to public safety," Dacic, who also heads the Interior Ministry, said on state television.
"This is not a capitulation to the hooligans," he said.
Riot police fanned out through downtown Belgrade on Friday evening and Serbian media reports said more than 6,000 would be deployed to maintain order with a string of anti-gay demonstrations announced for Saturday.
Conservative societies across the Balkans have been slow to accept greater gay rights, which are routinely met with violence when expressed in public.
"Clearly there were people (in the meeting) who believed that for political reasons, particularly because of EU integration, it would be good to have the parade, but what if we lose a human life?" Dacic said.
The Serbian Orthodox Church has spoken out against the march, saying gay rights were destroying the institution of marriage and family values.
Gay Pride organizer and activist Goran Miletic said the decision showed Serbia did not respect basic human rights.
"I cannot understand why a group of people who wanted to march peacefully through the city would bother anyone," he was quoted as saying on the website of the Belgrade daily Blic.
"Everyone's a loser here, except the hooligans who for the third consecutive year have proved they can tell that state what it can and cannot do," he said.
By Aleksandar Vasovic
BELGRADE
(Editing by Matt Robinson and Angus MacSwan)
REUTERS
Over 5.6 Million Reads Adam Gonzalez at September 28, 2013