Syria Agrees to Get Rid of Chemical Weapons? Rebels Don’t Have Clean Hands on this Crisis 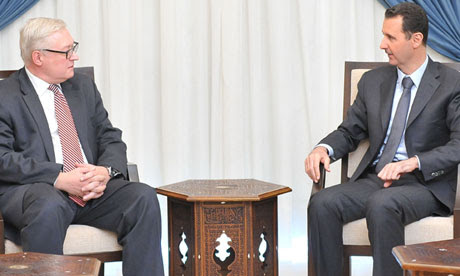 Syria Agrees with the Russians to get rid of the Chems
"Just a note: The Rebels don’t come out of this with clean hands and they proved that it would have been a grave mistake on our parts to get involved in the scale we almost did. All was set up, President Obama walked to the Rose Garden at the W.H. and said “: I’ve changed my mind. I don’t want to do this” This was contrary to the advice he was getting. These was going to infuse the Military suppliers in the US with an Immediate billions of dollars. Every bomb drop has to be replaced right away at today’s prices. And it would have made things worse!  So good that some president can change their minds even at the last minute."
(Adam Gonzalez, Publisher)
MOSCOW, September 19 (RIA Novosti) - Syrian President Bashar Assad has pledged to destroy his country’s chemical weapons, in an interview with a US TV channel.
Elimination of such weapons would take about a year, Assad told the Fox News channel Wednesday. He once again denied that his regime was to blame for the recent alleged use of chemical weapons near the capital Damascus.
Syria will not set forth any conditions for chemical arms destruction, and is ready for a return of UN chemical weapons inspectors, Assad said.
On Saturday, after days of intense negotiations,Russian Foreign Minister Sergei Lavrov and US Secretary of State John Kerry announced an ambitious plan under which all chemical weapons in Syria would be opened up to international inspectors by November and destroyed by mid-2014.
UN inspectors said Monday that they had found “clear and convincing evidence” that chemical weapons, including the nerve agent sarin,were used in an August 21 attack that killed hundreds of people in the Damascus suburb of Ghouta.

© RIA Novosti.
Elimination of Chemical Weapons in the World
The inspectors had no mandate to determine who had launched the attack, which the US and some of its Western allies have attributed to the Assad regime, but Moscow and Syria have called a provocation by anti-Assad rebels.
Lavrov said Tuesday that the UN report presented a day earlier had failed to answer certain questions and reiterated Moscow’s position that the Ghouta attack had been a “provocation” by opposition forces.
The unrest in Syria began in March 2011 and later escalated into a civil war. More than 100,000 people have been killed in the conflict so far, according to UN estimates.
Assad also said in the Fox News interview that Syria handed over to Russia data confirming that “terrorists” had used sarin in Syria.
Russian Deputy Foreign Minister Sergei Ryabkov said Tuesday after meeting with his Syrian counterpart Walid Muallem in Damascus that the Syrian authorities handed over to Russia evidence proving that Syrian opposition forces had allegedly been involved in the use of chemical weapons last month.
Over 5.6 Million Reads Adam Gonzalez at September 19, 2013