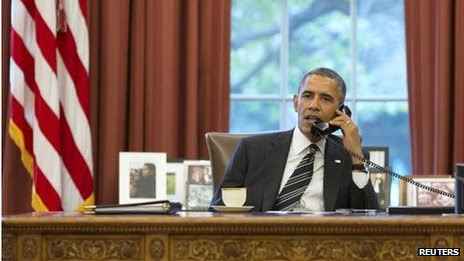 US President Barack Obama has spoken by phone to Iran's Hassan Rouhani - the first such top-level conversation in more than 30 years.
Mr Obama spoke of a "unique opportunity" to make progress with Iran's new leadership, amid a flurry of diplomacy over its nuclear programme.
Earlier, Mr Rouhani said Iran was keen to reach a deal soon.
He also asserted that Iran did not seek a nuclear bomb, as Western powers have long suspected.
Describing meetings at the UN this week as a "first step", he said he believed the nuclear issue could be settled "within the not too distant future".
Mr Rouhani said initial discussions had taken place in an environment that was "quite different" from the past.
'Full backing'
Continue reading the main story

James ReynoldsBBC Iran correspondent
Hassan Rouhani's actions in New York reveal a man dealing with the inherent, overwhelming contradiction of his job: he has a popular mandate without actual power.
In a speech given on 17 September in Tehran, Ali Khamenei approved the use of "heroic flexibility" in diplomacy. This would appear to translate as an instruction to President Rouhani: by all means see what you can get from the Americans, but don't go around shaking Obama's hand.
The ayatollah-approved outreach in New York included the first sustained direct talks between the US and Iran at foreign minister level for more than 30 years.
Hassan Rouhani may be able to recommend a deal, he may be able to explain how concessions are the best way to get sanctions lifted, and improve the lives of ordinary Iranians. But in the end, it is the supreme leader who will have the final say.
The call with Mr Obama was made just before Mr Rouhani left New York, where he has been attending the annual summit of the UN General Assembly, Iranian news agency Irna said.
White House officials described the 15 minute conversation - apparently initiated by Mr Rouhani - as cordial, the BBC's Bridget Kendall reports from New York.
Mr Obama raised concerns about American prisoners in Iran, but the bulk of the call was about efforts to reach a solution on the nuclear issue, she says.
Afterwards, Mr Obama said: "While there will surely be important obstacles to moving forward and success is by no means guaranteed, I believe we can reach a comprehensive solution."
Mr Rouhani, who is regarded as a moderate and was elected in June, has said he wants to reach a deal over the nuclear issue in three to six months.
He says he is fully empowered by Iran's Supreme Leader Ayatollah Ali Khamenei to negotiate.
On Friday, he told a press conference at the UN: "Whatever result we achieve through negotiations my government will have the full backing of all the main branches of power in Iran as well as the support of the people of Iran."
And he said he wanted a deal "within a very short period of time".
'Bomb is dangerous'
Earlier the UN's International Atomic Energy Agency (IAEA) said it had held "very constructive" talks with Iran in Vienna.
IAEA Deputy Director-General Herman Nackaerts did not give details of Friday's talks, but said the two parties would meet again on 28 October.
"We will start substantial discussions on the way forward to resolving all outstanding issues," Mr Nackaerts said.
Reza Najafi, Iran's envoy to the IAEA, was quoted as saying that the aim was to reach an agreement "as soon as possible" and also spoke of a "constructive discussion".
Continue reading the main story

Jeremy BowenBBC Middle East editor
On Thursday US Secretary of State John Kerry held a rare meeting with his Iranian counterpart Mohammad Javad Zarif.
Mr Kerry said he was struck by the "very different tone", but added that Iran still had questions to answer.
There had been speculation that Mr Rouhani and Mr Obama might meet in New York. Mr Rouhani told journalists that "in principle we did not have any problems with having a meeting", but "there was not sufficient time" for planning the encounter.
The Iranian president rebuffed questions about Iran's reliability as a negotiating partner, saying his country wanted to retain nuclear technology but would submit to IAEA supervision.
"We say explicitly that we do not seek a bomb," he said. "We say explicitly that we believe the building of a bomb is dangerous for us - for our region."
The US and China have said they expect Iran to respond to an existing offer by the US, Russia, Britain, France, China and Germany, who form a negotiating group known as the P5+1.
The group has asked Iran to halt production and stockpiling of uranium enriched to 20% - a step away from achieving a nuclear weapons capability.
They also demanded Iran shut down the Fordo underground enrichment facility, near Qom.
Substantive talks between Iran and the P5+1 are due to take place on 15 October, and Mr Rouhani said Iran would bring a plan to that meeting, though he did not give details.
Iran's key nuclear sites

Email ThisBlogThis!Share to TwitterShare to FacebookShare to Pinterest
Labels: Iran, US President