Customer Receipt Described The Couple as “The Gay Guys" 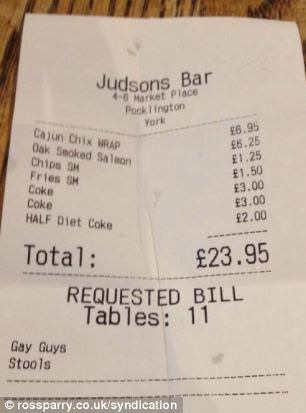 Staff at Judson's Bar were left red-faced after they gave a customer a receipt with a description of him and his friend - as 'gay guys' so that colleagues knew where to deliver their food
A bar has been forced to apologise to two customers who were given a receipt describing them as 'gay guys on stools'.
Al Butler and his friend, both aged 26, were left fuming when they were handed the bill at the end of their lunch.
A waitress had written 'Gay guys...stools' on it to show fellow staff where the pair were sitting when they delivered their food.
He complained after spotting the line on the receipt at Judson's Bar, in Pocklington, East Yorkshire which was used as a guide to indicate to staff where customers were sitting.
Mr Butler has been left angered by the treatment he received calling it as 'unacceptable as racism.'
He said: 'My friend spotted it first and said "I think the manager's misconstrued our lunch"
'I obviously thought it was inappropriate. It took a while for it sink in. It was not insulting, it was just a shock.
'I was surprised. I would not expect it anywhere else. It's as equally unacceptable as racism.
'It's not a bad thing to be called gay - although I'm not and neither is my friend - but I think it's prejudiced. It's jumping to a conclusion without the need to do so.'
Mr Butler, who was visiting his home town from Derby, where he works as an aerospace engineer, claimed when he had complained in person at the bar he had not received an apology.
He then sought out owner Mr. Ward and complained to him and Judson's Bar now says it has 'apologised unreservedly' and said the member of staff involved, who had been working at the bar for a few days, has been disciplined.

Instead the barman simply told him: 'Sorry, there's nothing I can do.'
Bar owner Peter Ward said: 'We have apologised unreservedly. While it was completely wrong, I don't feel it was prejudiced.
'It was completely unprofessional and it is not what our business is about. 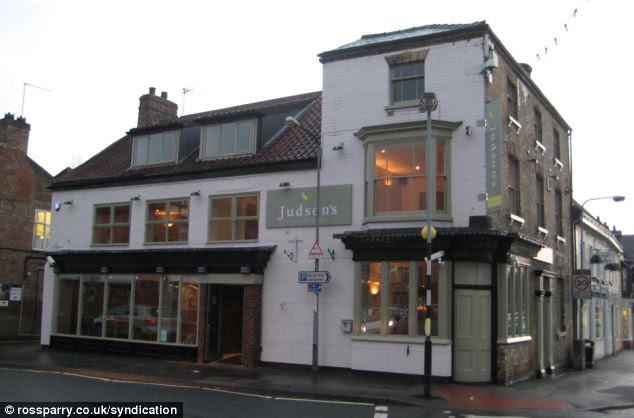 Unprofessional: Owner Peter Ward has apologised unreservedly and called the conduct of his staff 'unprofessional', he also says the waitress involved has been disciplined

'We understand why the two gentlemen concerned were offended and we have apologised to them unreservedly.
'We have also disciplined the waitress concerned and put in place a procedure so it will not happen again. I would add that everyone is welcome at Judson's.'
But equality campaigners have still criticised the behaviour as 'inappropriate.'
James Lawrence, of the sexual equality charity Stonewall, said better staff training was needed in order to prevent behaviour like this in the first place.
He said: 'Incidents like this highlight the importance of staff training. Identifying customers by their perceived sexual orientation is unnecessary and could cause offence.
'It's right that the bar should apologise to the customers for this inappropriate behaviour.'
A spokesperson from the York Lesbian, Gay, Bisexual and Transgender Forum said: 'Clearly this is an unacceptable and wrong stereotype made by a member of staff at the bar, but it is also a mistake which could cause great offence and upset to anyone involved, regardless of their sexuality.
'We would welcome any business to contact us should they feel their staff require training on issues of equality, where we would be more than happy to assist.’
By FRANCESCA INFANTE
Daily Mail uk

Email ThisBlogThis!Share to TwitterShare to FacebookShare to Pinterest
Labels: Homophobia/Commerce