Historic One to One Talks Between Iran and the US 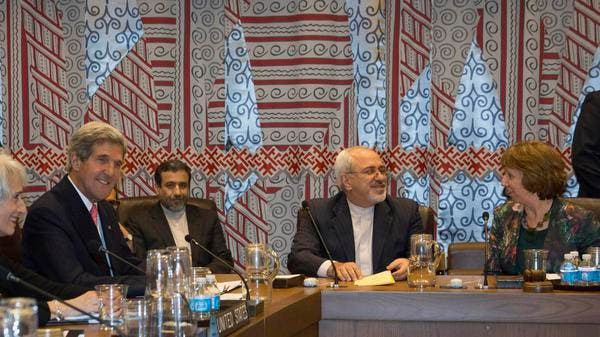 U.S. Secretary of State John Kerry (L), Iran's Foreign Minister Mohammad Javad Zarif (2nd R) and European Union High Representative Catherine Ashton (R) are seated during a meeting at U.N. Headquarters in New York. (Reuters)
Al Arabiya
U.S. Secretary of State John Kerry and his new Iranian counterpart Mohammad Javad Zarif met one-on-one on Thursday in one of the highest level contacts between the two rivals since the 1979 Islamic Revolution.
Following the meeting, Kerry said he was pleased with the new positive tone from Iran on talks over its nuclear program.
“Needless to say, one meeting and a change in tone, which was welcome, doesn't answer those questions yet and there is a lot of work to be done,” Kerry told reporters.
Zarif said he stressed during the meeting the need to continue such discussions and that sanctions are counter-productive and have to be removed “as we move forward.”
Iranian President Hassan Rowhani also made a statement after the talks, saying Iran was committed to negotiate on its nuclear program in “good faith.”
“We are fully prepared to seriously engage in the process toward a negotiated and mutually agreeable settlement and do so in good faith and with a business-like mind,” Rowhani told a think tank forum in New York, AFP reported.He addressed the Asia Society and Council on Foreign Relations soon after his foreign minister held talks with major powers at the United Nations in the highest-level contact ever between the United States and Iran over its nuclear program.“We hope that this positive step that has been taken as a first solid and strong step will help us continue talks,” Rowhani said.Asked about his recent remarks to The Washington Post that he wanted a deal within months, Rowhani said: “The sooner the better.”“We think that a speedy settlement will support both sides,” he said.
(With AFP and Reuters)
Over 5Million Reads Adam Gonzalez at September 27, 2013

Email ThisBlogThis!Share to TwitterShare to FacebookShare to Pinterest
Labels: International Affairs, Iran, US