The Pope Has Chartered a New Course for His Church 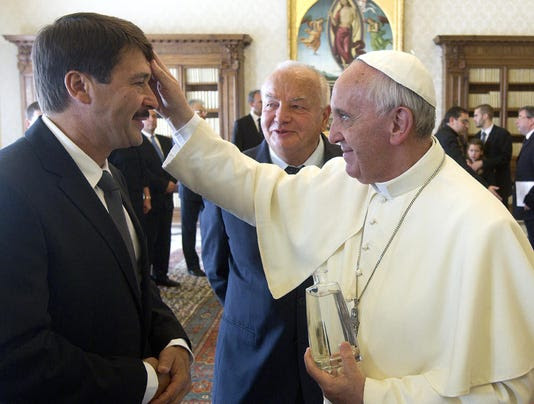 (RNS) Pope Francis on Thursday (Sept. 19) rocked the Catholic Church and surprised the wider world with a free-ranging interview that charted a course away from an institution that's "obsessed" with a few sexual and moral issues and toward one that is more pastoral, less clerical and less doctrinaire.

But amid the widespread praise for his remarks – "Catholic is the new cool," tweeted National Journal's Ron Fournier – and some pointed criticism from the pontiff's right flank, there lurks a critical, unanswered question: Can Francis make his vision for the church a reality?
More than detailing a list of reforms or policy change he hopes to make — which may yet happen, after time and extensive deliberations — the pope was sketching out a pastoral vision for the church, and modeling a way for clergy to speak and relate to their flocks.
In order to replicate that model, Francis needs enough time to appoint bishops who share his views and who can in turn encourage and promote like-minded priests and seminarians. In many ways, the type of change Francis envisions will take a generation or more.
Already, some in this current, more conservative-minded generation of bishops have signaled their unhappiness with the pope.
"I'm a little bit disappointed in Pope Francis that he hasn't, at least that I'm aware of, said much about unborn children, about abortion," Rhode Island Bishop Thomas Tobin said this month in an interview that reflected comments made earlier by Philadelphia Archbishop Charles Chaput and others.
Francis' latest remarks seemed clearly directed at those internal critics; he said flatly that "I have never been a right-winger" and noted he has been "reprimanded" for his new direction. A major challenge is that those conservative bishops will continue to have influence if they are not replaced or sidelined, or if the 76-year-old pope has a relatively short reign.
The cautionary tale that many progressive Catholics point to is that of Pope John Paul I, the "smiling pope" whose election in 1978 seemed to herald a new era of a pastoral papacy – and a church molded in the same spirit.
But John Paul I died after just 33 days in office, opening the way to the election of John Paul II, an enormously popular figure yet one who began a sharp tack back toward doctrinal orthodoxy and conservatism.
That's not to say the odds are against Francis. He turns 77 in December but seems to be in good health and appears at peace with the role that has been thrust upon him, in part by being pope the way he was a bishop and priest – as a pastor.
Moreover, his predecessor, Benedict XVI, was 78 when he was elected and within eight years managed to name more than 60 percent of the American hierarchy before retiring last February. Since bishops must submit their resignations to the pope at age 75, and the hierarchy skews older, a pope can name a relatively large number of bishops in a fairly short time.
In addition, Francis' remarks on Thursday may embolden more progressive clergy who have had to keep their opinions to themselves.
"I think that there are a fair number of bishops here in the U.S. who have quietly gone along with the more trenchant, culture warrior approach … because they thought that going along was what was expected of them," said Michael Sean Winters, a columnist for National Catholic Reporter.
"I suspect there are some bishops in the U.S. who will respond with great vigor to his call even while there are some bishops, like Archbishop Chaput and Bishop Thomas Tobin, who will continue to gripe that the pope is not talking enough about abortion," he added.
The power of the papacy, however, goes beyond just moving bishops around like pieces on a chessboard.
Churchmen raised in a hierarchical culture are especially attentive to a change in command at the top and can adjust their style accordingly. And as pastors they can also be sensitive to what the church would call the shifting winds of the Holy Spirit. Both of those instincts can prompt a change of heart – and leadership style – that does not necessitate a change in jobs.
Francis seems to be betting that he can have as much of an effect with his words as he can with his appointment power. Just look at other remarks he made on Thursday, in an address to newly consecrated bishops that drew little notice but may prove just as important.
In his brief talk, Francis blasted the "cancer" of "careerism" within the hierarchy, and he warned the prelates to "avoid the scandal of being 'airport bishops'" who fly around to one high-profile event or another and fail to stay close to their flock.
"What's clear is that Pope Francis is consciously, not accidentally, but consciously taking the church in a different direction. He is trying to change the culture of the church hierarchy," said the Rev. James Bretzke, a Jesuit theologian at BostonCollege.
Cultures rarely change quickly, and whether Francis will be able to do what he wants may not be evident for some time. Even the pontiff, in the interview published this week, seemed to recognize that.
"I am always wary of the first decision, that is, the first thing that comes to my mind if I have to make a decision," the pope said. "This is usually the wrong thing. I have to wait and assess, looking deep into myself, taking the necessary time. The wisdom of discernment redeems the necessary ambiguity of life and helps us find the most appropriate means, which do not always coincide with what looks great and strong.”
David Gibson, Religion News Service
Over 5Million Reads Adam Gonzalez at September 21, 2013